He expects these disruptions to demand are to continue with Germany, France and he UK all having announced month long national lockdowns. The German price, which dominates the European average, fell by around €21 in the eight weeks to 1 November.

In addition, according to AHDB analyst Bethan Wilkins, EU cull sow prices have not followed quite the same trend as the finished pig market in recent weeks.

She said that sow prices did fall disproportionately in late summer, with limited processing capacity affecting the sow market more, as the more valuable finished pigs were prioritised.

“This is probably why prices have now merely moved back in line with levels seen earlier this year, rather than falling further, as has been the case for finished pigs,” Wilkins explained. “Sow meat is also traded more within the EU market so will be less directly affected by Germany’s loss of the Chinese export market.” 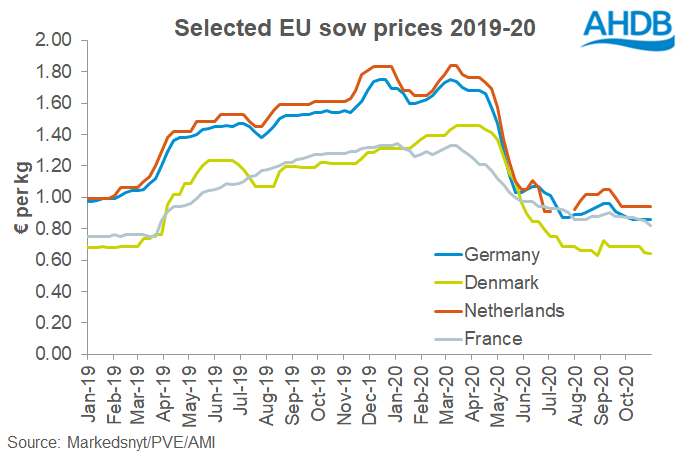 She added that  with coronavirus restrictions in place across Europe, the outlook for Christmas demand is uncertain and that he likelihood of support from trade in the run up to Christmas is, therefore, probably low.

Prices outside of Germany have largely followed a similar trend, which Wilkins said would be expected given that Germany is the main EU market for sow meat, adding that for British producers, the outlook for sow prices now has added uncertainty, as we still don’t know whether trade with the EU will remain tariff-free after the UK leaves the customs union at the end of this year.

Ms Wilkins added: “The income from cull sow sales does not make up a very large portion of the income for producers, especially farrow-to-finish operations. But, with feed prices rising and finished pig prices also falling, the potential for further devaluation in cull sows would certainly be an unwelcome development for the industry.”