“Agriculture needs to wake up and reconnect,” the report states, adding that by connecting with consumers and taking a ‘long, hard look at all practices and improving where they can’, farmers will find it easier to make the case for government support.

The report, led by Dr Maurice Bichard with other contributors, including former AHDB Pork chair Meryl Ward, notes that the commercial lowland livestock sectors are ‘frequently attacked on account of their scale, and public perceptions of their modern production systems’.

But it insists: that there are ‘actually many benefits to animal welfare which can result from an increased scale and intensity of individual livestock units and total businesses’. These include better conditions and career prospects for staff, the ability to employ specialists and investment in modern buildings and new equipment and control systems.

The report highlights the ‘real welfare success stories’ of the UK pig sector, which haven’t been properly acknowledged, including the move to 100% group sow housing, half of sows farrowing outside and a higher weaning age. 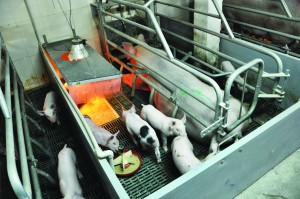 A fresh emphasis
Continuing to improve the health and welfare of all livestock will be essential in maintaining and increasing the consumer’s support for modern food production systems, it adds.

As we move away from the CAP’s ‘unsatisfactory’ support mechanisms towards a more efficient domestic policy, with an emphasis on public goods, the report makes the case for an outcome-based animal health and welfare stewardship programme that drives up standards.

The Farm Animal Welfare Committee has recommended that farm health and welfare policy should be underpinned by detailed plans for livestock units, to embrace housing, equipment, medication and vaccines, transport, abattoirs and staff training, backed by routine recording and analysis.

Wider strategies agreed with government should include plans to tackle endemic disease through better surveillance, diagnostics and improved biosecurity.

“There are important elements of public good in these and it is reasonable to expect government to participate in some funding,” the report concludes, citing, for example, paying for professional advice and grants for buildings, equipment and training.

“Improving welfare on large-scale units can require significant investment, which cannot be adopted where sectors have faced low or negative returns.”