Reading this got me thinking about how much current production methods and infrastructures are pitted against the production of a quality slaughter pig in terms of the eating experience for the consumer.

It’s worth considering, from the perspective of the piglet, the journey from birth to slaughter. If lactation management has been a complete success, then a litter of at least 12 piglets have been taken from their mother and moved to an appropriate environment in which they can find warmth, a dry bed, a separate dunging area, fresh water and the appropriate nutrition. Each of these pigs will weigh at least 7kg – with the largest probably in excess of 9kg – and in the latter stage of their time on the sow, they would all have been drinking fresh water, eating creep feed and clearing up any food spilled by their mother.

They will, as an entire litter, be mixed with other pigs of the same age and from the same environment. These weaners will already be primed for the shock of weaning, and in a very short time will be eating and drinking and established in the first stage of the feeding herd with their siblings.

The first habit they will want to express from their time being suckled will be communal feeding. It’s not a habit that will be broken easily, but in my experience there’s never enough feeding spaces for the simultaneous feeding of newly weaned piglets. In this scenario the weaker piglets start to get pushed out and could begin to fall behind. If this happens, the slowing up of these weaners is a management failure, not a nutritional or genetic failure. And if a percentage of healthy pigs gets marginalised at this point, then vulnerability to health challenges is introduced and this will only go one way in terms of threat for the whole batch.

Production challenge
Now, consider the situation where lactation management isn’t successful, which is, in my experience, currently a challenge to UK production. This time a litter of anything from six or seven up to 10 piglets will have been taken from their mother and moved in the same manner as the piglets discussed earlier. However, the condition of the piglets will be very different. There will be some at weights of less than 6.5kg, which is really below the qualifying weight for a future feed-efficient pig, and there will be some piglets weighing up to 8kg or more that will appear “as fat as butter”; these piglets have probably never drunk water or eaten creep, but gorged themselves on their mothers diminishing supply of milk to the detriment of their siblings.

At the point of weaning, the smaller piglets are likely to be graded as smalls and will suffer the double shock of being removed from their mother and from their siblings. And the larger piglets won’t fare much better as they have little idea of how to feed themselves, and are likely to “go backwards” for about the next 10 days. Once again, these scenarios leave the pigs open to health challenges.

The UK pig industry has very good genetics, pig vets and nutritionists, yet weaned pigs in week one remains a common point at which production potential stalls for lack of the appropriate management considerations, and it’s almost impossible to recover the original potential of the pigs. 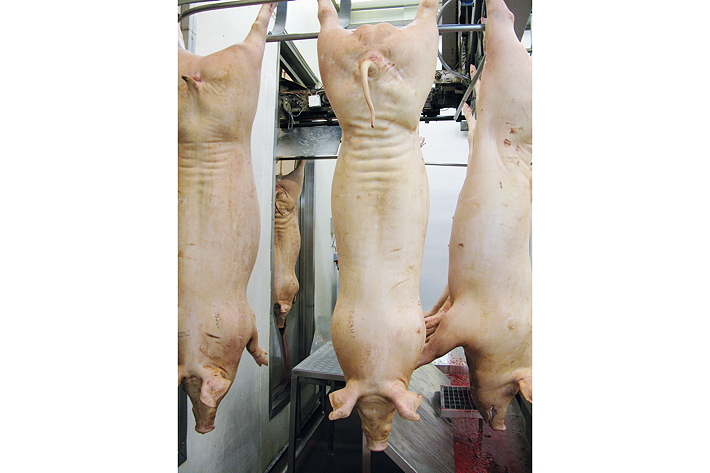 Lost performance
For some time, I’ve believed that mixing pigs, whether sows or their progeny, at various stages of their respective production cycles incurs a production cost in degrees of lost performance, and solid figures on the extent of this loss just aren’t available. Some mixing is unavoidable, but most is dictated by industrial thinking. These industrial principles can override the complex ways in which pigs would normally interact, yet I believe the key to success in animal production is to understand these complexities and use them to our advantage.

My thoughts on this are informed by the degree dissertation on the topic written in 1976 by Bobbie Watchorn (née Fryers) – the wife of Simon Watchorn. From birth and before the piglet is weaned, the first hierarchy is established in the litter. The sibling hierarchy will remain as long as the piglets are retained in the same group, therefore if litters are mixed after weaning pigs become members of more than one hierarchy simultaneously.

Pigs of similar social rating tend to continually antagonise one another, whereas groups of varied social rating establish more settled dominant/subordinate hierarchies. Grading pigs into batches at weaning seems to ensure an on-going insecurity in the batch. Any further introduction/removal of pigs leads to further stress.

Research suggests that the number of pigs belonging to a single stable hierarchy is limited by each pig’s capacity to remember the identity of the other members of that hierarchy. This supports the importance of size variation within the group. In her dissertation, Bobbie Watchorn cites reasonably comprehensive research that suggests the ideal group size is between 10 and 20 pigs.

Husbandry will play a large part in achieving and maintaining success at these levels. A proportion of current indoor finishing accommodation is based on this “ideal” population range, however, the majority of today’s feeding herd accommodation limits a producer’s ability to manage populations at this level.

Weaned pigs are commonly graded into large groups, and the group size reduces as they move through. An increasing number of producers are also grading into gender groups. Mixing is, therefore, considerably more than is desirable, and certainly more than is beneficial in terms of feed efficiency and meat quality.

Narrow pens
I’ve long suspected that narrow pens, in terms of shape, are detrimental to social stability in feeding herd groups because they increase the encounters between pigs in the pen. Pigs like their personal space just as much as you and me. Bobbie Watchorn highlighted the fact that pigs “maintain a ‘personal field’ only in front of their heads and often rest side-by-side in physical contact with one another”.

It’s not just the ascent to heavier weights that has increased the incidence of boar taint, neither is it the reduction in the age of sexual maturity associated with body weight in line with the genetic improvement of commercial sire-lines. It’s clear from the Dutch findings that boar taint is already given considerable stimulus by production methods and infrastructure that lack or can’t justify the level of investment required to manage populations effectively.

Red Tractor’s derogation for structured trials of the boar-taint vaccine, therefore, is significant for the long-term prospects of pig production in the UK. It also highlights the critical importance of getting the expectations of farm assurance into balance with the needs of producers.

I hope that the vaccine, which is already licensed for use in the UK, can be given a clear passage for farm trials with sensibly agreed protocols that might help us discover if it can help British producers achieve that balance.