However, it appears that the US is starting to move more in line with the European stance. In 2014, the President’s Council of Advisors on Science and Technology issued a report on the current situation and growing risks around all areas of antibiotic use, including agriculture. The report recommended that measures to control the use of antibiotics within the US, some of which were already in place, were needed and that further steps should be implemented to reduce the risk of resistance developing. The Federal Drug Administration has issued several pieces of legislation to make in-feed medication veterinary prescription-only, and has also stopped licensing new antibiotics for use as growth promoters.

The introduction of medicated feed prescriptions marks a step in the direction of more controlled availability of antibiotics within the US, and this now appears to have been accepted by the majority of the industry. There were some concerns raised around how this would add cost, or how it would limit access to medication for farms in remote areas with little access to veterinarians, but, ultimately, there was widespread acceptance to this approach.

Catch-up position
Whichever way we look at it, the US is still in a position where the use of antibiotics is still relatively free and has some way to go to catch up on the stance that’s been taken by Europe. The speed at which the US is restricting antibiotic use has been seen as too little, too late, by some countries, and there are moves internally within the country to take a much harder line on the use of antibiotics.

This culminated in an announcement last year by Subway, which said it would be going antibiotic-free within a year for poultry meat, and all meat would be completely antibiotic-free within nine years. Other retailers have followed suit, and made similar promises to consumers. The catch-all term now being used for these products is “boutique meat”, with organic and high-welfare production also falling under the same classification. However, in direct contrast to high-welfare and organic, terms not as well developed in the US as they are in the UK, antibiotic-free is a much more loaded phrase.

There’s been much discussion on what constitutes antibiotic-free. It’s still unclear if it’s meat that’s been produced completely without antibiotics, or following a withholding period, or without growth promotion. As well as its unclear definition, there’s also been some investigation into the long-term viability of animal production, in particular pigs and poultry, with the complete absence of antibiotics.

In principle, production under these conditions would require two parallel systems of production, with pigs produced antibiotic-free being moved across to conventional production if antibiotic treatment is required. The pork produced without the use of antibiotics would then be sold to consumers at a premium. 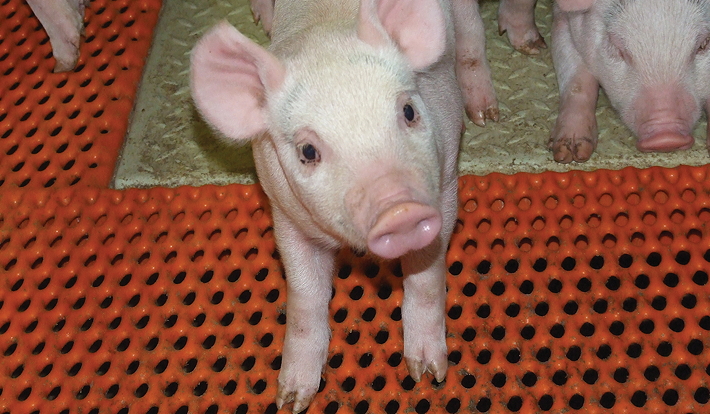 Two parallel systems of production may be required, with pigs produced antibiotic-free being moved across to conventional production if antibiotic treatment is required

Product uncertainty
There’s uncertainty about the market for antibiotic-free as a product; but, having said that, outlets such as Subway must feel it’s important to the consumer. In reality, the concept has many potential flaws that would need to be overcome before it was a potentially viable product. One of the main concerns is the possible effect on animal health and welfare from the development of this practice. It certainly would make the production of pork more challenging, and it’s hard to determine the profitability of the enterprise.

It would be unlikely that all cuts of antibiotic-free pork could command the same premium, and there’s potential for there to be carcase balancing issues leading to downgrading of certain cuts into the conventional-meat supply chains. However, there may be an advantage for those first to market to potentially access buyers for different cuts on the global market. Whatever happens, it’s likely that if there’s a market for antibiotic-free meat, it would only be those first to market who could exploit the exclusivity of the product and benefit significantly from this approach.

If we take experiences from the UK market for high-welfare or organic pork, it still only makes up a relatively small proportion of the total pork market, and often demonstrates that consumer demand is more driven by cost than morals. Extrapolating the consumer behaviour from what we’ve seen in other markets, the assumption could be made that antibiotic-free is a potentially limited market, but one that’s gained traction by a number of retailers as a unique selling point. This may lead to the production of meat under these systems becoming a commercial reality.

To label boutique meat production as the way forward for the pig industry, or to follow antibiotic-free production as a healthier option for the consumer, misses the point. That’s because the use of antibiotics to treat infection is not wrong, and cautious use, with good stewardship, is a justifiable approach. There’s a risk that by terming meat antibiotic-free, it would degrade conventionally produced meat by association.

We recognise that UK consumers are still largely unaware that antibiotics haven’t been used for growth promotion in the EU since 2006, so the term antibiotic-free has the potential to confuse consumers further. While there may be some potential to develop this market, there are several obstacles to overcome before it could be made sustainable, long term, in the UK.

Martin Smith joined AHDB Pork in September 2014 and is the organisation’s veterinary team manager. He specialises in animal and public health, disease prevention and animal welfare.