“Hmmm,” I replied, and returned to the warm to do some calculations.

So, how far do they walk? The rather sparse information I can locate suggests between 1km and 10km each day, with about 2km/day as a sensible average – dependent on weather conditions, naturally.

It seems that a 200kg dry sow covering this distance, in winter rather than in summer, increases its need for energy to maintain body condition by at least 2MJ/DE/day and maybe 3MJ/DE/day – about 226g of a 13MJ feed.

Consider the temperature
That’s just for walking about – what about temperature? A 200kg sow, in good condition, the literature suggests, needs 1MJ for every 1C less than a nominal lower critical temperature (LCT) of 20C in an adequately bedded ark. Ideally, she should attain this LCT for 16 out of the 24 hours anyway, thus no problem. But if she wanders about outside in a not-too-cold +5C for eight hours a day (15 degrees less than her LCT for one-third of the 24 hours), she’s radiating away the equivalent of 120MJ/day and needs extra feed to replace it.

A lifelong winter climber, now safely retired, I know windchill has to be considered too! I’d suggest that another 0.4-0.5kg/day of food is needed for an outside dry sow in reasonable condition in a reasonably mild winter; but double that in a tough one, especially when windchill adds to the radiation loss.

Windchill must always be taken into consideration, and it’s wise to add another three to five degrees to the LCT equation should there be a cold wind, and 10 degrees for an icy one – which means another 0.9kg of feed.

The thin sows I saw just weren’t getting enough food, and the producer thought that in such a mild spell they just didn’t need it. 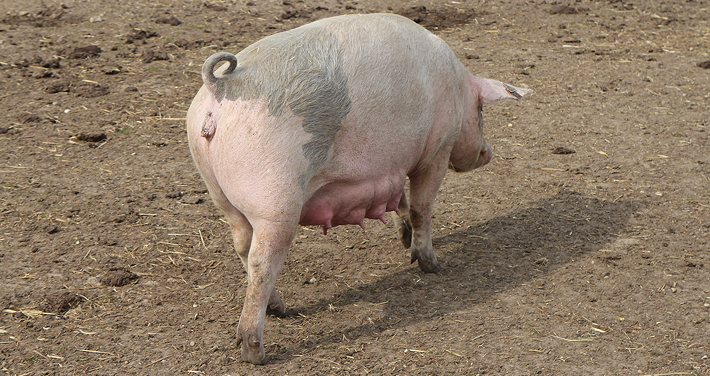 Winter problem
The other issue that occurred to me was that changing paddocks/pasture has always been a problem in winter, when to follow the well-accepted advice that “the match is the outdoorer’s disinfectant”, bedding quickly becomes wet and difficult to burn properly. As far as we could, we made the changeover on a dry day and got most of it burnt. Otherwise, it went on the dungheap, which involved the nuisance of loading and transportation.

As to the land itself, after a trip to the Soil Research Association (SRA), taking some soil samples with me, they stressed the importance of time to give as much chance for dryness and ultraviolet rays to work on the build-up of bugs left behind in the soil. We then followed SRA advice of allowing two summer crops and one winter fallow, the latter featuring two scratchings with the tine harrow.

Our health status was good under this regime – for example, our swine dysentery problem disappeared for a decade as the bug seems to love compacted soil. The SRA also told me that a useful amount of ultraviolet penetrates the clouds in even moderately overcast weather.

As far as I’m concerned farmers should do more of these exploratory visits to academic centres. I’ve always learnt a lot from each visit and have had some of my accumulated views put straight.