This led to him being involved with LKL Services, ‘Britain’s premier supplier of relief and contract personnel to the agricultural sector’. Although targeting the dairy industry, Jon saw a gap in the pig market and founded Roadhogs as a result.

He began recruiting from his bedroom (the office used to be in a cardboard box under a desk!) A friend of Jon’s would take the calls for him to help him out and three months later, Clive Searson (pictured, main) was snapped up thanks to his expertise in the pig industry.

Clive continues to be Roadhogs’ chief pig specialist working across East Anglia and beyond troubleshooting, advising producers on how best to retain and attract quality staff and how to run a tip-top unit.

Clive recalled: “Jon asked me to go to a job in Norfolk. All I knew was the start date and an idea it was Norfolk. I started to make my way the day before from Stafford to Norfolk. Slightly concerned that I still didn’t know where I was meant to be going, I stopped off at a service station to call Jon.

“I got the answering machine, with the usual message – ‘You have reached Jon Roads and Roadhogs, so please leave a message, and if you are Clive Searson, please turn around as you are now going to Somerset!!’.” 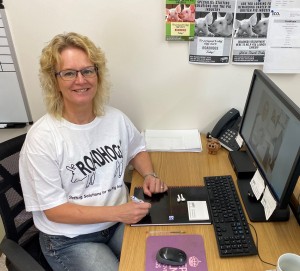 Liz Barker (left) joined in 2006. With a sharp mind and top people-skills, she was tasked with looking after the accounts. Not long into the job, Liz began to get more involved with the recruitment side of things and became Jon’s ‘right-hand-woman’.

Sadly, Jon passed away quite suddenly in 2017, and Liz took over the business. With the industry and Jon’s nearest and dearest shocked and hugely saddened, it was up to Liz to keep Jon’s legacy alive and keep Roadhogs moving.

Over the years, the team have experienced all sorts of ups and downs but remain confident that the British Pig Industry will continue to grow and attract young to new talent.

Liz said: “We are passionate about the pig industry, and we strive to help and support the industry as best we can. Judging and assessing individual skills to best match requirements on both sides.

“We’ve also been encouraging and promoting young farmers and graduates, helping them to get their foot on the ladder.

“As I have seen over the years, choosing to join the pig industry can be very rewarding, leading to long and fulfilling careers.”

You can find out more about Roadhogs Recruitment via their website or social media channels.