However, the average cost of GB pig production was 155p/kg in Q2, according to the latest AHDB estimates, 7p higher than the previous quarter. This significant rise in feed costs pushed up the cost of finishing pigs and eroded margins.

This rise in production costs was largely due to higher feed costs (+7p), while a marginal increase in ‘other’ variable costs (+1p) was offset by a 1p decline in building, finance and miscellaneous costs. 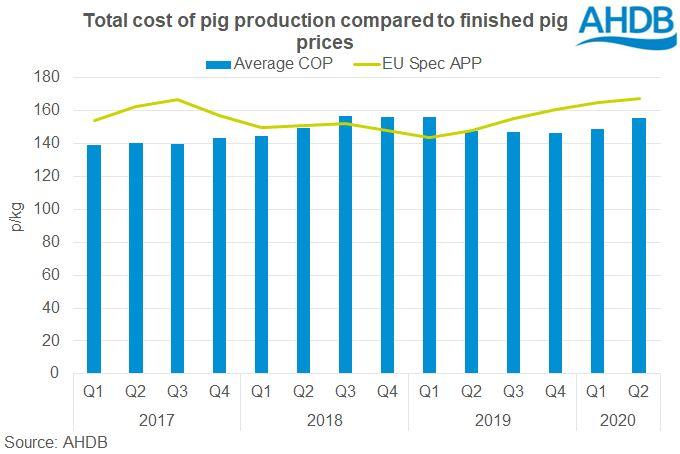 It is likely that producer margins will have come under further pressure in recent weeks, due to falling prices and rising costs, according to AHDB analysts Felicity Rusk.

Since the week ending July 11, the EU-spec APP has fallen by almost 3p, while, since the start of July, average GB ex-farm prices for feed wheat have risen by £4.70/tonne, bolstered by high premiums to encourage the movement of grain into deficit areas.

“Looking ahead, much uncertainty remains in the market. It is unclear how domestic demand will develop, as more of the foodservice sector reopens and people head back into offices and schools. Furthermore, we do not know what the trading relationship between the EU and UK looks like post-Brexit,” Ms Rusk said.

“Nevertheless, opportunities on the export market look promising. Chinese demand for pig meat is expected to peak in 2020, according to the latest OECD-FAO outlook. However, demand from 2021 onwards is expected to fall back, as the nation’s own domestic production is expected to show some recovery.”