“We must push the health and versatility aspect of our products because our offer has to be relevant and fit the modern repertoire,” he said. 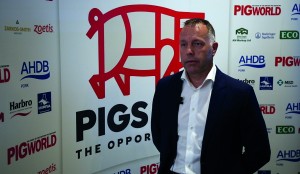 Mouthwatering footage and images from Cranswick’s marketing portfolio were inspiring. The accompanying slogans – ‘Sell the meal, not the meat’ and the rallying call ‘Let’s make pork great again’ – hit home with delegates and were widely repeated over the two days.

Cranswick currently accounts for around 50% of UK pork exports and sees significant growth potential in China, Asia and the Far East, where it already exports ‘about 27% of the weight of the carcase’.

“We are genuinely a good news story waiting to happen, but we need more government support to gain greater access to these regions and their burgeoning retail markets. Help us secure access to export markets – we will do the rest,” he said.

He described Brexit as ‘fundamentally our greatest challenge’ and urged the new Government to ‘provide clarity on what a deal will look like’.

With EU exports accounting for a relatively small proportion of Cranswick’s trade, his main Brexit focus was the nature of trade agreements with its major export destinations, notably in the Far East and the US. “My biggest concern is that many of the regulations and procedures that we need to follow for certification are derived from the EU, so we need these to pass over smoothly,” he said.

* Cranswick has invested £240m in its integrated pig production and supply business during the past eight years
* It slaughters 60,000 pigs per week on three sites in East Yorkshire, Norfolk and Northern Ireland
* Around 20% of its production comes from Cranswick’s own farms.

Labour is also big issue, he added, given the food and agriculture sector’s heavy reliance on staff from the EU and beyond.

He concluded: “The future is definitely positive for the pork industry. We must continue to capitalise on the British reputation abroad and urge the Government to promote our cause in the post-Brexit environment.”

Sheldon urges pig sector to take a close look at competitors
New AHDB Pork chairman Mike Sheldon said the UK pig sector needed to pay more attention to what its competitors are doing, if it wanted to maximise its own potential on the global stage.