In the UK, the RSPCA Freedom Food scheme previously allowed ‘temporary crating’ – farrowing pens with farrowing rails to restrain the sow for up to five days post-farrowing, after which they are removed so that the sow is free to roam in the pen. 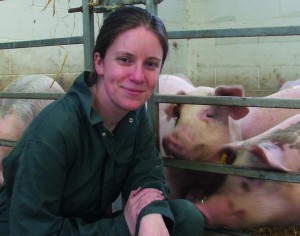 In 2016, new RSPCA Assured rules increased the pen area to 5.7sqm, and included a requirement for a bedded nest area as well as a creep, in addition to stipulating: “Equipment that has the potential to confine the sow for farrowing must not be used”.

Recently, the three-level Hearts for Pigs welfare scheme was launched in Denmark. Basic welfare attracts a ‘One heart’ label, while ‘Three hearts’ accreditation is effectively fully outdoor production, which currently applies to only about 1.25% of Danish pigs.

“However, they would not have the specific design features that promote good maternal behaviour that, for example, the PigSAFE free farrowing pen developed by SRUC and Newcastle University has,” Dr Baxter said.

The Danes have recently built a fit-for-purpose comparison ‘showroom’, which has 10 different companies’ farrowing pens under one roof. Nine are temporary crating pens and one is a Danish-designed free farrowing pen (Well-Fair-Pen). Seven of the companies are Danish, one Dutch, one Austrian and one from the UK – the Midland Pig 360 farrower, she added.

Free farrowing is also being incorporated into group, or multisuckling, systems. This involves keeping groups of five or six sows and their litters together from farrowing to weaning and was popular in the 1970s.

It is making a comeback and being trialled in the Netherlands and Australia. With the right stimulation, sows will come on heat three weeks after farrowing and the success of multisuckling revolves around getting the sow back in pig while she’s still lactating. In Australia, some are trialling hormones to induce heat, which is hardly ideal, she said. 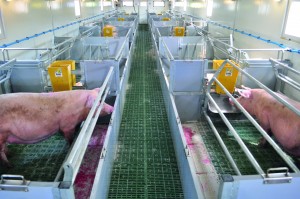 When asked what the future holds for free farrowing, Dr Baxter suggested: “Loose lactation (temporary crating) will increase, but the cost of full free farrowing makes it more of a challenge to see any major uptake.”

Improving performance needs optimisation of pens, pigs and people. Staff have to be comfortable working with free farrowing sows, which have health and safety implications. “Hopefully over time, lines can be bred with improved mothering ability, leading to less overlaying along with higher piglet survivability,” Dr Baxter concluded.