Professor Jeroen DeWulf, head of veterinary epidemiology at the University of Ghent, said the studies showed that, while pig producers are keen to invest in proactive health controls, many fundamental ‘loopholes’ exist within internal herd hygiene and disease control procedures that are probably compromising vaccine efficacy and herd immunity. 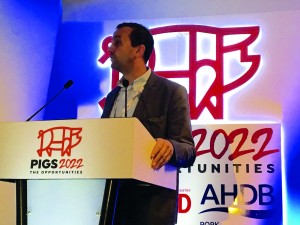 Vaccine surprise
“It was surprising to find that farms using more vaccines were also using more antibiotics,” he said.

“This could be because the herds that don’t vaccinate are more motivated to keep on top of health and therefore operate more stringent disease controls. But it might be that the techniques and timing of the vaccinations used are not as good as they could be, which then allows disease to occur later.”

These findings, and other MINAPIG data, indicate that internal biosecurity is a critical issue for the EU pig sector. Analysis showed investment here produces the highest return, when compared with other initiatives to improve disease status. Skills deficits, complacency, lax communication, inadequate hygiene and sub-optimal infection control can hamper biosecurity and disease control, but they can all be addressed through education, said Prof DeWulf. 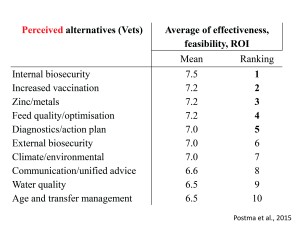 Coaching improvement
He highlighted an approach implemented by a number of Flemish farms that delivered outstanding results. During one year, 61 farms were visited three times with management teams ‘coached’ by specialist vets and health professionals on biosecurity and disease prevention tactics.

Strategies were developed and monitored with outcomes analysed against production and cost targets. In less than 12 months, all farms reported vast improvements in herd health and a considerable reduction in medication use.

A 45% cut was seen in piglets and an 80% reduction in finishing pigs. Costs were incurred, amounting to €43/sow and €2.70/finisher and mainly due to increased time and labour, but they were economically justified by the benefits, Prof DeWulf said.

Similar extension studies carried out in other MINAPIG countries reported a 35% reduction in overall antibiotic use, although these countries had lower antibiotic consumption than Belgium, which topped the rankings.

“No single routine or management protocol will suit every farm. Reducing medications needs a bespoke approach and every herd will have to learn what works best for them,” Prof DeWulf added.

The MINAPIG Project
The MINAPIG project evaluates practical strategies that will help farmers reduce the use of antibacterial medication in their herds. Data was collected from 227 farms in France, Germany, Belgium and Sweden and Biocheck, a survey developed and validated by Ghent University, was used to score internal and external biosecurity and medication use.

Treatments for clinical respiratory infections in their weaned and finishing pigs were also much lower.