China’s charge
The UK industry’s high-welfare, quality-assured, sustainably produced stance has faciliated export trade, with substantial inroads forged in key destinations, including China and the Far East.
China continues to be the chief destination for beef, pork and poultry exports and is predicted to remain the world’s largest net importer of meat, excluding sheep meat, for some time to come.

Long term, the industrialisation of China’s agricultural sector will inevitably raise domestic productivity, lower costs and improve the quality of its product, Mr Brown said. He predicted a small decline in meat imports (down 10%) for 2017 after the ‘spectacular surge’ in 2016.

But the overarching sentiment during the day was that, despite efforts to increase capacity, escalating production costs, up 14%, and heightened environmental problems associated with production will continue to push up domestic pork prices and leave China heavily dependent on pigmeat imports. Following a recent visit, Danish Crown’s Asger Krogsgaard estimated Chinese production costs were 60% higher than Denmark’s.

Mr Brown said: “There will still be significant import volumes. Pork is deeply strategic for the Chinese Government. Volumes are huge and they will carry on managing the market and importing as much as they can manage.”
With China’s current enthusiasm for trade deals, EU pork sectors, particularly the Danes, are benefitting from this demand and China’s increased focus on quality pork products, he added.

The EU produces more than 20% of global pigmeat supplies, but, despite the opportunities presented by China, its place on the world stage is under pressure from burgeoning low-cost commodity pork producers such as Brazil and, potentially, Russia. 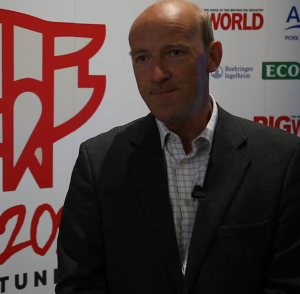 North American competition
Mr Brown also expects the aggressive expansion of the US hog industry to modify inter-regional trade patterns. The US and Canadian pig sectors will see a 10% growth in capacity from 2016 to 2018 and as more Free Trade Agreements are secured between developing nations, the EU pigmeat market might find it is threatened by greater import penetration if it doesn’t stay at the forefront of demand developments, he added.

By comparison with the US and Canada, the EU sector remains fragmented with under-investment – the Spanish pig industry bucks the trend, with growth and profit potential – while in the east, African swine fever (ASF) is a genuine threat.

Europe will face serious challenges unless it can safeguard its health status, capitalise on its sustainability advantage, further improve production efficiency and access more trade with Asian markets, he warned.

Brexit might be littered with uncertainty, but fortune favours the brave.
By nurturing the UK’s differentiated status, said Mr Brown, the UK pig sector might avoid being ‘marginalised’.