There was also a considerable increase in the number of pigs over 87kg, which accounted for 28% of the overall increase of the pig herd.

While the breeding herd also recorded an increase in numbers in March, it was only a minor 0.4%. 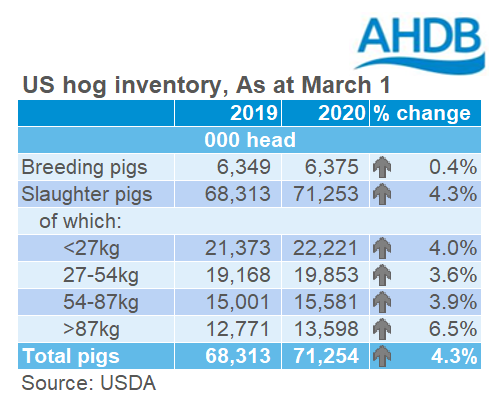 US hog prices fell between the end of January and the end of February, as news of the coronavirus (COVID-19) pandemic developed. Since then, prices have risen again, which Rusk attributes to demand falling as much as initially feared. Reports suggest that US consumer demand for pork remains strong, which if continued, should provide support to prices.

Labour availability is a key area of concern within the US pork industry as labour both on farm and in packing plants is highly reliant on foreign-born workers. On 17 March, the US Department of State suspended visa processing in Mexico, which will likely worsen the labour shortage across the US.