An instinctive approach to antibiotic usage and continual reinvestment helped earn the couple recognition in the form of the Special Achievement of the Year at the 2019 National Pig Awards. 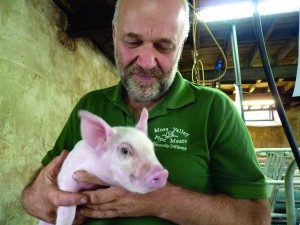 Stephen is a member of the Just Farmers network that aims to connect farmers with the media. Pic credit (main pic and above): www.justfarmers.org.uk

At the centre of their herd management is pig health – gut health in particular – and very minimal use of antibiotics. Since they began pig breeding in 1984, they have tried to avoid using antibiotics unless they needed to.

“We have always aimed to avoid overuse of antibiotics by keeping our herd healthy in the first place,” said Stephen.

“Healthy, productive animals also mean a healthier purse. When we do use antibiotics, it’s vital to use them properly and complete the course so that they work fully and minimise the risk of resistance developing. No in-feed or in-water antibiotics have been used for 15 years; we have managed any challenges with oral and injectable treatments and management interventions.”

The farm is not far from Sheffield and a good distance from any other pig units. “That isolation is a real benefit,” Stephen added. “It provides an ideal opportunity to keep the unit biosecure, but we can never be complacent. Hygiene has always been vital for us. Vehicles, pigs and people coming onto the farm are a risk that we must manage, the same as any other unit.

“One challenge we have is the farm’s layout, which means lorries can’t come round the perimeter, so we ask them to come fully clean. For example, the feed lorry makes us its first delivery after the weekend.

“Visitors must be an absolute minimum of 48 hours pig-free and wellies and overalls are provided for all visitors, as foot dips alone are not reliable enough.

“A few pairs of wellies are inexpensive when you compare them to the price of the first bottle of antibiotics.”

“We pressure-wash and disinfect accommodation between batches, as we’re on a three-week batch farrowing system, except the finisher accommodation, which is old and difficult to clean in the same way. That’s the next area for investment.

“We ‘double disinfect’ the farrowing and weaning accommodation between batches with two different products, to make sure we kill rotavirus.”

The environment pigs are kept in is really important and the Thompsons’ next step is to refurbish their old concrete-slatted finishing accommodation. They replaced their first-stage weaner accommodation with plastic slats and plastic walls after a fire and have since reinvested in the same type of housing throughout the unit. Everywhere has slatted floors except the sows, which are on partial slats, and the gilt pens, which are straw-bedded.

Karen said: “We believe slatted systems are best for the health of the pigs as they separate the pigs from their faeces and our new plastic accommodation is easily cleaned and disinfected. That isn’t really said often enough.

“The more controlled environment on an indoor slatted unit makes it easier to achieve higher productivity per tonne of feed so it’s more carbon efficient than outdoor production.”

The couple have always run a closed herd, breeding their own replacements. After some underlying health problems in the original herd they decided to fully destock and restock in 1999. However, some of the new breeding stock came with atrophic rhinitis, which they have controlled ever since by vaccinating all sows pre-farrowing.

Sows are vaccinated against rhinitis and erysipelas and are given Neocolipor to protect piglets against E. coli scour. Gilts receive a parvovirus vaccine. “We make sure we store the vaccines at correct and consistent temperatures in a pharmaceutical fridge which we found second hand,” Stephen explained. “We’ve used an ileitis vaccine in piglets at weaning for around 20 years, rather than using in-feed antibiotics to control it. 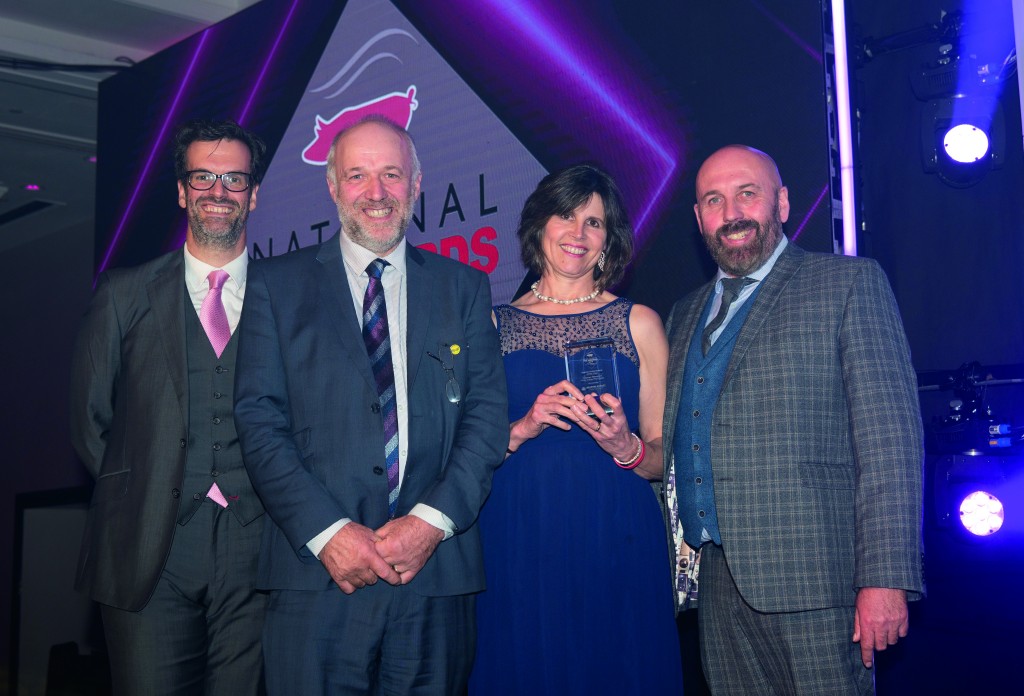 “Because vaccination is preventative, you get better performing pigs that aren’t being compromised by health issues and it’s more cost-effective in the long run. We trust in our vaccines and they work well when stored and used properly.

“You also have to consider that vaccination doesn’t have an impact on the richness and balance of the gut ‘ecosystem’ in the way that antibiotics can.”

The couple have a long-term interest in the impact of gut health on the pig’s health and performance. 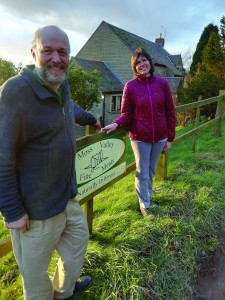 Karen said: “It’s a vast, complex area and there’s more research yet to be done in pigs but we think about it a lot on our unit.

“The gut is populated with masses of microorganisms – not just bacteria but also others, like yeast – and a healthy gut means that everything is kept in balance, with good organisms able to keep bad ones at bay. Gut microflora has a big influence on pig performance throughout the production cycle.

With this in mind, the Thompsons prefer to feed meal from wean to finish, rather than a pellet, to optimise gut health. They started providing a yeast supplement to lactating sows about 10 years ago and now it’s added to all sow diets to help prevent sow mortality due to Clostridium infection. “We were vaccinating before but still had some mortality,” Karen said.

“The yeast competes directly with the Clostridium in the gut itself and stops it proliferating. Now we just use the yeast supplement with great success.

“While there are times when antibiotics are necessary to treat a particular issue, they can upset the balance of the gut microflora by removing good bacteria at the same time as the pathogenic bacteria they are targeting.

“If antibiotics kill a whole body of good microorganisms, it can leave an empty space that can be recolonised by something else, which could lead to another health issue and you can become trapped in a cycle.

“It could take up to six months for gut microflora to rejuvenate, or it may never get the opportunity in the pig’s lifetime if it doesn’t come into contact with the various organisms for reinoculation.

“We always make sure we have careful look before deciding to use antibiotics and will often use anti-inflammatories, for example, to treat lameness, if it looks like a physical cause rather than infection.”

In the past the herd has struggled with inconsistent conception rates. Sows were slow to come on heat and there was too wide a service window.

“Last summer we started top dressing with 150g dextrose per day, from day 15 after farrowing until service,” said Karen. “It’s essential to provide the right nutrient balance at key times.”

Feed is home-mixed and they use a supplementary top dress for lactation, high in extra nutrients: fishmeal, biscuitmeal, soya oil and vitamins and minerals.

“Our aim is to farrow 24 to 25 sows every three weeks, but we were struggling to achieve this until we started adding the dextrose. Since then, we’ve been serving between 27 and 29 sows and farrowing 24 or 25 consistently.”

New LED lighting in the service area, 40% funded by an EU leader grant, has helped with this. The farrowing rate is now about 89% and sows are weaning around 13 pigs per litter, so they are now close to 30 pigs/sow/year. “But our main aim is for consistency. With the conception rate now improved we will hopefully maintain production at that level,” said Karen.

Sows are usually culled at parity five, though they occasionally keep them until parity six as a maximum.

“It’s essential to keep a really good stock of replacements,” said Karen. “We aim to serve six or seven gilts per three-week batch, using an initial pool of 15 home-bred gilts. It’s crucial that we can always bring enough gilts in, to keep the batch numbers right and the herd working.”

Stephen added: “We’re now switching our focus from a continuous drive to increase litter size towards maximising piglet weights at weaning and minimising piglet mortality so we can capitalise on that from wean to finish. This is where the greatest financial gains are to be made.

“Our aim is to rear our pigs as fast as possible to our target weight on a given amount of feed and, to do that, they have to be given the best start possible from birth. 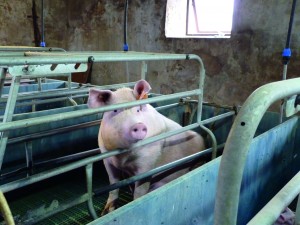 The Thompsons aim to farrow around 25 sows every three weeks

“There’s a fine balance, as we want to keep achieving a good number of pigs weaned per litter, but not at the expense of weaning weight. We want to wean what we have more effectively with our current labour and make the most of the pig’s genetic potential to grow.

“We focus on good preparation for transition and we rarely lose piglets at weaning.”

The Thompsons hand feed supplementary milk from two days old and introduce creep, as a crumb, from 10 days. This helps prepare the piglet for weaning by encouraging it to look for other sources of food from an early age, so it is not reliant only on the sow. It helps develop gut maturity ready for weaning and helps rear smaller piglets in larger litters. The crumb is made into a gruel for the first five to seven days post-weaning to smooth the transition from milk to solid feed.

An encapsulated Clostridium butyricum product is added to the supplementary milk and competes with pathogenic species to stop them colonising the hind gut. It has reduced the incidence of piglet diarrhoea and any problems seen are controlled with dehydration powder. “We’ve been using it for nearly a year now and we’ll carry on,” said Karen. “We also currently use zinc at weaning and are ready now to reduce levels to half rate and see what happens.

“We haven’t got everything right by any means, but we never stop investing, asking questions and learning. There are lots of small tweaks we’ve made to get us this far and Stephen is always looking at the next development he can make in the butchery as well as on the farm.” 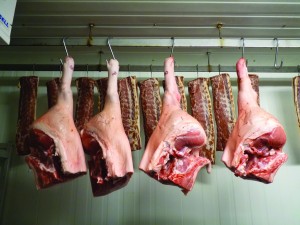 They sell 15% of the unit’s pork through the butchery. Credit: www.justfarmers.org.uk

The couple share huge pride in their business and the industry as a whole and Stephen is keen to help communicate it to the public. Moss Valley Fine Meats, his wholesale butchery, has really got caterers and consumers excited about pork and its consumption has increased in the Sheffield area, underpinned by consistently quality produce.

Keen to generate more income when pig prices were low, he sells 15% of the unit’s pork through the butchery, to restaurants, delis, cafes and at farmers’ markets.

Stephen said: “We do trials of different cuts or products for restaurants and pubs. When our local pub put pork shoulder steaks on the menu they rapidly sold out.

“Rattlerow provides us with both our Duroc semen and conventional damline genetics. The Duroc is good for intramuscular fat that gives better eating quality. Our shift to Danish Durocs means pigs grow really well and those we sell to the abattoir are still lean enough. We have to manage the pigs to meet the requirements of our customers.

“We don’t have many aggression problems. Piglets are split-sexed at weaning and there is less mounting and lameness, plus it’s easier to select gilts for the butchery. We’ve had to tweak the nutrition as the growers need pushing to 60-70kg.

“But, already, the change in genetics and diet to match has added 10kg to the finished weight and taken two weeks off the time taken to do it. Daily gain is 800g to 820g from wean to finish, with a finished weight between 84kg and 88kg.

“Like elsewhere on the unit, we’re feeding a high specification diet and, even though it’s more money per tonne, we’re saving two weeks’ worth of finisher feed at the end. High health is important again here too, of course, as it means the pigs are able to respond well to the nutrition.”