But such a target doesn’t mean much at the coal face, given the difference in usage between the sectors, so the Responsible Use of Medicines in Agriculture (RUMA) alliance brought the industry together to develop targets at a sector level.

The response to the targets by the pig sector so far has been nothing short of fantastic, representing a true team effort, led by producers and vets.

The pig sector has made huge progress towards the 2020 target of 99mg/PCU from the 2015 baseline average usage figure of 278mg/PCU. Annual average usage has more than halved, according to the data collected on the eMB-Pigs database, which now covers about 90% of production and is a Red Tractor requirement. 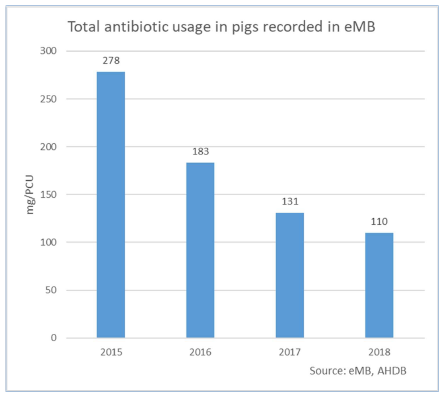 The 2018 figure of 110mg/PCU, down from 131mg/PCU in 2017, put the 2020 target in reach, despite significant disease challenges. The 2019 figure is expected soon. Just as importantly, the pig industry has already achieved its targets for reducing the use of highest-priority Critically Important Antibiotics (HP-CIAs), which is now at ‘an extremely low level’.

“It took a lot of work to put the targets together in a short period of time, but the targets we set have been met by our sector and that is down to the dedication and hard work of vets and farmers,” Mr Lister said.

“We have had to change what we do and how we approach antibiotic usage, but I am pleased with what we have managed to accomplish. No other country has taken this voluntary approach and achieved so much.

“But there is more to do. These targets run to 2020, so while we should be proud of ourselves, we are now in the midst of exploring the next phase of targets, which will fall in line with the UK five-year action plan for antimicrobial resistance, which runs from 2019 to 2024.” 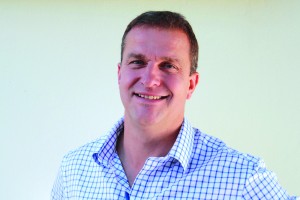 Mr Lister has been joined by current PVS president Richard Pearson on what is now renamed the RUMA Targets Task Force II (TTFII). The output of TTFII will be announced in late-2020 by RUMA, but the PHWC AMU sub-group has brought together a smaller committee to explore and plan for these targets. Pivotal to the discussion has been the data available to the group.

“We are in a very fortunate position of having the ability to drill into the eMB-Pigs data, thanks to AHDB. eMB has been a critical element in the success that has been achieved so far and not all sectors are so fortunate,” said Mr Pearson.

“I have lived the first phase of targets through my work in practice and as part of PVS, but nearly six months ago we really started to consider what the second phase of targets should look like.”

As the TTFII sets about the task of looking beyond 2020, it is exploring new numerical targets, but is also keen to investigate other aspects of activity which could be included. It is not just about numbers; it is about how antibiotics are used and the general health of the pig herd.

The focus will also remain on ensuring we are able to responsibly use antibiotics to address disease challenges as they emerge, something that has become increasingly important for some units over the past 12 months or so.

“The changes we make do impact the numbers, but as producers we work with our vets on many things such as training our staff,” Mr Lister said. “Other sectors have included these more holistic aspects in their targets before, so it is something we are giving consideration to.”

Lots of producers have reduced annual usage to very low levels, in some cases single figures. But this suggests, with a 2018 average of 110mg/PCU, there are still some consistently high users out there.

One of the key issues the group therefore hopes to address is how to change the behaviour of those producers with habitual high usage of antibiotics.

The concern is that these producers damage the good reputation that the rest of the industry has achieved through a willingness to change its attitude and the management of pig health. They will be targeted through a number of measures which are still being finalised.

“While the majority of producers take a responsible approach there are some that don’t – we need to support and encourage these people in making changes to address the challenges they face,” said Mr Pearson.

“We know it’s not always simple and there are other factors, such as infrastructure and complex health challenges, that can underlie high usage. We haven’t been looking at this in a one-dimensional format – it’s definitely multifactorial.

“We recognise that every farm is different and the last thing anybody wants to do is destabilise pig health in order to meet arbitrary targets.”

Despite our departure from the EU, the Government has made it clear it will make changes, which it will be consulting on later this year, in the same timeframe.

“The nuances in the legislation, and indeed the interpretation thereof, will alter how we use antibiotics to treat and manage pig health in the future,” said Mr Pearson. “Producers and vets need to be aware of this as the ‘playing field’ could look quite different in just a few years.

“We are exploring various scenarios in our TTFII proposals dependent on varying impacts from these pieces of legislation. We are putting a lot of work into this because we want to get the targets right – they need to be ambitious but also achievable.”

The discussion about antibiotics and how they are used in agriculture continues in the UK and in Europe. In the last few months, the European Medicines Agency (EMA) has consulted on the use of the ‘cascade’. The cascade is used where there is no medicine authorised for pigs in the UK for a specific condition, the veterinary surgeon responsible for treating the animals may treat the animals with a medicine licensed for another condition in pigs, or a medicine licensed in another food-producing species under the cascade.

The EMA’s Antimicrobial Ad-Hoc Expert Group (AMEG) has also issued new antibiotics advice, adding an intermediate category (C – caution) for antibiotics which should be used when there is no antibiotic available in the category below (D – prudence). There is more information on this on the RUMA website (www.ruma.org.uk) and PVS is re-drafting its PVS Prescribing Principles to reflect these changes.

Mr Lister added: “We’re informally consulting with members of PVS, NPA and levy payers through AHDB and look forward to sharing more over the coming months. We all have to live with these targets and play our part in achieving them, so engagement from all of industry is imperative to our continued success.”

While they can’t share any figures publicly yet, there is a lot to consider for Mr Pearson and Mr Lister and the group supporting them in their TTFII work.