Exports to China remained at elevated levels in June, with shipments of pig meat (incl. offal) up 44% in volume terms on the year. Average export prices, meanwhile, dropped back by around £90/tonne on the month.

Ms Rusk commented: “The return to pork export growth suggests that much of the logistical disruption caused by the pandemic was largely resolved by June.” 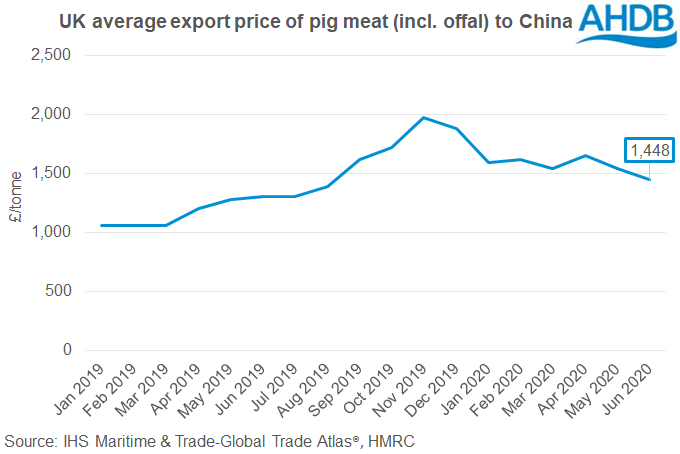 UK imports of pig meat continued to fall below the previous year in June, although the rate of decline was not as large as  in recent months. This brings imports in the first half of 2020 to 404,200 tonnes, 13% less than in the previous year.

Import volumes of fresh/frozen pork fell by 10% on the year to total 29,400 tonnes. Fresh/ frozen pork imports from Belgium and the Netherlands alone were down by almost 4,000 tonnes compared to June last year.

Imports from Germany did increase by 16% (1,200 tonnes), but it was not enough to compensate for the declines from other source nations.

Imports of processed pork were up on the year, recording an uplift of 14%. Shipments of sausages also were elevated on the year. In contrast, imports of bacon dropped back by 6% on the year.

Ms Rusk added: “While the average import price remains higher than last year, the decline in volumes means that the total value of imports in June only increased by 5%, to £197.3 million. This brings the total value of pig meat imports (incl. offal) for the first half of the year to £1.2 billion, just 0.6% less than the same period last year.”