The UK exported 24,800 tonnes of fresh/frozen pork in July, 30% more than in the same month last year, the largest annual change recorded since May last year.

“The considerable uplift in shipments suggests that any logistical challenges seen earlier in the year due to the coronavirus pandemic have been resolved,” AHDB analyst Felicity Rusk said.

This uplift was almost solely driven by a rise in shipments to China. Exports of fresh/frozen pork to China reached almost 13,000 tonnes, almost double the levels of July 2019 (6,900 tonnes) and the highest volume exported to China in a single month on record, Ms Rusk said.

However, average export prices to the nation continued to fall in July. Prices of fresh/frozen pork averaged £1,376/tonne, £145 less (-10%) less than in the previous month. 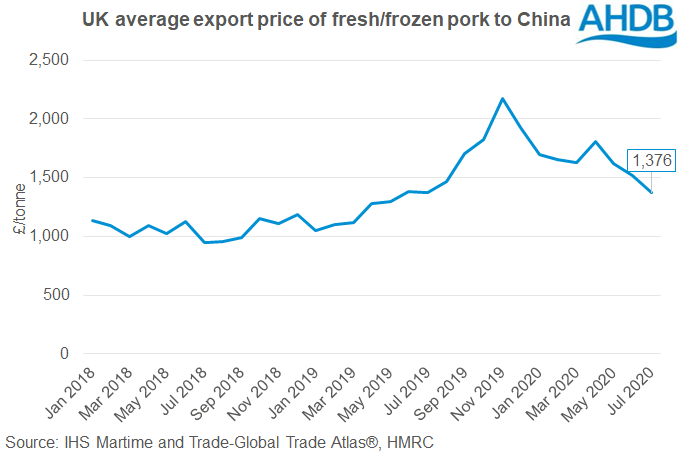 Shipments to some other destinations recorded a decline on the year, offsetting some of the growth in volumes to China, including exports to Ireland (-400 tonnes), the Netherlands (-200 tonnes), Denmark (-100 tonnes) and the Philippines (-200 tonnes).

Offal exports also recorded an uplift compared to last year, increasing by almost 20%. This was supported by an increase in shipments to China (+1,200 tonnes), Belgium (+400 tonnes) and the Philippines (+300 tonnes).

Overall, in July, UK exports of pig meat and offal totalled £56.1 million, 19% more than in the previous year.

Meanwhile, UK imports of pig meat continued to track below last year in July, with import volumes of fresh/frozen pork down by 21% on the year to total 26,900 tonnes. Declines in shipments from Germany (-1,800 tonnes), Belgium (-1,600 tonnes), Spain (-1,400 tonnes) and the Netherlands (-1,500 tonnes) accounted for the majority of the decline.

Average import prices remained above last year. As such, even with the decline in volumes, the total value of pig meat imports in July only fell by 8% on the year, totalling £190 million.