The faster growth rates were likely a reflection of higher feed usage. During the rearing stage, feed consumption averaged 52kg per head, 9% more than during the 12-months to September 2018. With the combination of lower rearing feed costs (-10%) and strong finished pig prices, some producers may be using more feed to ‘push’ animals on.

Though feed usage was up on the year, rearing pigs were converting this feed less efficiency. In the 12 months to September 2019, the feed conversion ratio (FCR) averaged 1.74, 0.08 higher in the 12 months previous. This meant that it took on average 80g more feed to add 1kg of weight to the pig. 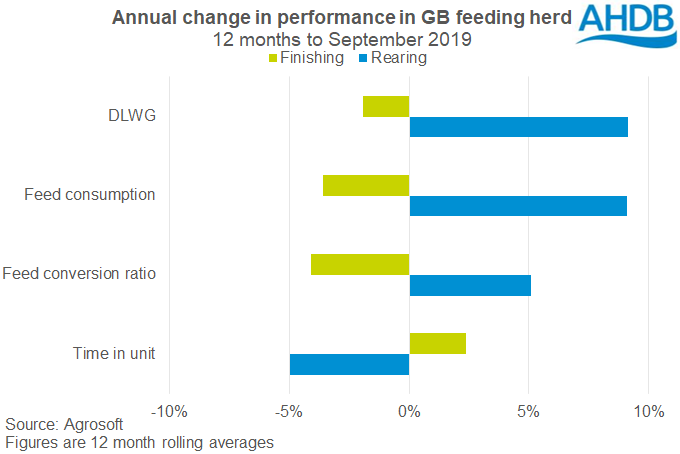 Although finishing pigs were more efficient in converting feed, less feed was fed, and so this did not translate into higher daily weight gains. In the 12 months to September 2019, the DLWG for finished pigs averaged 798g/day, 16g lower than in the previous 12 months.

Pig were also taken to heavier finished weights over the past year. When combined with the falling rate of weight gain, pigs were on the finishing unit on average 1.9 days longer than in the previous 12 months. Nonetheless, the rapid growth at the rearing stage meant the overall time to slaughter was still a day less than over the year before.