The survey, hosted on the NPA’s website, received 138 responses from producers of all sizes and systems, pork processors and members of the allied industries. Key findings included:

The survey also highlighted the industry’s fears for the future as the UK plans its departure from the EU. 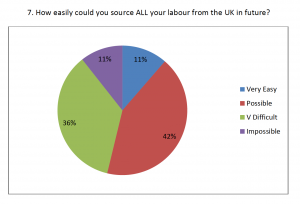 In its submission to the MAC, the NPA said EU workers have provided a welcome solution to the historic difficulty of attracting domestic labour for the UK pig sector.

The response highlights the misleading nature of the official term ‘low-skilled’ to describe many of the EU workers employed by our pig farms, meat processors and allied businesses.

“They are anything but ‘low-skilled’. Animal husbandry clearly requires a high degree of technical skill but many roles do not require graduate level training,” said NPA chief executive Zoe Davies 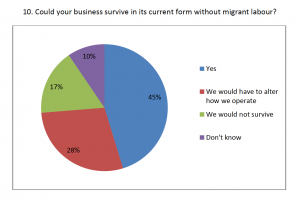 “The Government has made it clear it wants to restrict permanent so-called low-skilled workers after we leave the EU. The NPA is making the argument in the strongest possible terms ‘lower skilled’ workers employed in the pig sector should be included on the ‘shortage occupation’ list and prioritised after we leave the EU.

“We are already seeing the effects of Brexit on our ability to secure EU workers and our survey highlights the scale of the crisis this sector faces if we get our immigration policy wrong. Without the workers, we simply can’t produce and process the fabulous British pork enjoyed by millions of consumers. Exporting pork production is in nobody’s interest.” 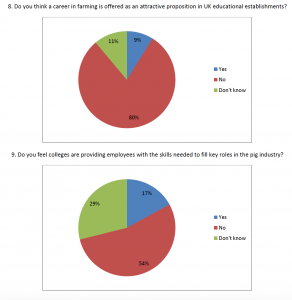 Four in very five respondents said farming was not being offered as an attractive proposition by UK educational establishments, while more than half said colleges were not providing employees with the necessary skills.

Mr Barker added: “The talent and enthusiasm is out there. It is critical that, as we leave the EU, the agricultural industry works with Government and the educational sector to champion agriculture as a great place to work and to provide the right training and skills to meet the sector’s needs.”

The online survey was accessed via the NPA website in late September and early October. Just over 90% of respondents were producers, with the rest from the processing and allied industries. Of all respondents, 62% employed fewer than 10 workers, while 12% employed more than 50.

The latest member poll followed a survey into EU labour carried out by NPA last autumn. The results can be viewed here

Home Secretary Amber Rudd commissioned the Migration Advisory Committee to seek views from across the UK economy to inform its post-Brexit immigration and labour policy. The NPA submitted its five-page response on October 27.