This brings total pig feed production in 2019 to 1.91 million tonnes, 3% higher than 2018 and the highest production in nearly two decades.

The combination of more pigs, finished at heavier weights will have supported demand for finisher feed. Lower feed prices compared to the previous winter may have also encouraged producers to be less cautious about feed usage.

“We also believe that the breeding herd has expanded modestly over the past year, which will have supported demand for breeding feed.” 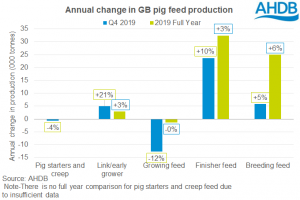 Ex-farm feed barley prices have been tracking below the price of imported maize since the start of February. This has encouraged the usage of barley in rations, at the expense of maize.