“The most striking challenge lies in the difficulties of the UK exporting products to the EU as it would be treated as a third country in such a scenario. In 2017 the UK exported 157,000 tonnes of pork to the EU, worth £208m, and this still represents our biggest export market for pork.”

In this eventuality, new arrangements for trade would kick in from March 2019. Exporters would have to familiarise themselves with new export codes and processes, while anyone exporting would have to deal with serious red tape that will likely mean having an export agent to do it for them.

“Supply chains and contracts would have to be ‘reconsidered’ in light of this. In essence it is not seamless at all and the costs and barriers of moving the product would be prohibitive. This would offer difficulties in the export in cull sows with the irony that exporting pig products to China will probably be easier on Day One,” Ed added.

“With such an integrated supply chain in pork, it is difficult to see what exporters can do to adequately prepare for third country status without passing on costs to producers, or seeing this export trade as fundamentally unviable. With further uncertainties about the future status of permanent migrant labour, the notices only underline the NPA’s call for a need for all parties to find a suitable EU/UK deal that allows a continuity in frictionless trade.”

Setting out what he described as ‘practical and proportionate’ advice in case the UK leaves the EU without a deal, Brexit Secretary Dominic Raab (pictured) stressed that reaching a deal with the EU was the ‘overriding priority’ and ‘by far the most likely outcome’. But he said ‘we must be ready to consider the alternative’.

He dismissed some of the ‘wilder claims’ about a No Deal. “Let me assure you that you will still be able to enjoy a BLT after Brexit, and there are no plans to deploy the Army to maintain food supplies,” he said.

The technical notices also clarified that, in the short term, farm payments will continue to be made on the same basis as now and under the same conditions. This includes continued access to grants and payments made through the Rural Development Programme for England (RDPE).

But the notice on organic farming suggested that the trade of organic agri-food products would face a cliff edge situation after Brexit, the NFU said. The products would not be allowed into the EU until UK organic certification bodies are officially recognised by the EU Commission – as this stands, this approval could take up to nine months. 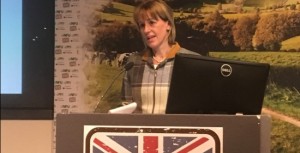 NFU president Minette Batters said: “While these notices are an essential part of Government’s plans for preparing for all outcomes, they serve as a sobering reminder of what is at stake for farmers in the event of a no deal.

“The technical notice for organic farming is a warning for us on the future of trade of all agri-food products. This could result in effectively a trade embargo on exports to the EU. Not only would this be hugely disruptive but it threatens livelihoods and businesses in the UK.

“The absolute priority for the NFU continues to be that we maintain free and frictionless trade with the EU. Last year 60% of UK food, feed and drink exports were to EU countries and 70% of our imports in these products were from the EU. This trading relationship is worth £45.5bn.

“We look to Government to clarify the vital issue of trading with the EU for the farming sector in the remaining technical notices due to be released.

“We believe that a deal is the most likely outcome to the ongoing negotiations between the EU and UK and we urge both sides to find pragmatic solutions to the issues still outstanding between them. A no deal outcome would be the worst possible one for the farming industry.”

NFU Scotland president Andrew McCornick said: “Today’s announcement has not told farmers or crofters anything new and has only left us with the same questions as we had before.

“The government need to start giving details of what life is going to be like on the other side of Brexit.”

Chris Atkinson, Soil Association head of standards said: “The technical notices published today offer no further clarity to businesses and provide neither reassurance nor advice on how to prepare for a potential ‘no deal’ scenario. They confirm the scale of the challenge we face and the vital importance that the UK achieves a workable deal with the EU.”

“The information outlined raises concerns that imports and exports to and from the EU may be held up for months. The critical issue of continuing recognition by the EU of the organic status of products certified in the UK is left entirely unresolved by this paper and a similar document that was issued by the EU some months ago.”

CLA President Tim Breitmeyer said: “It is encouraging to see the UK Government is making contingency plans in the event of a no deal Brexit.

“All farmers need certainty and do not wish to leave the European Union without an agreement firmly in place which is in the best interests of the industry.”