The internet-based eYeGrow, which is sold through JF McKenna, is suspended a few feet above the pigs inside the pen, taking up to 20,000 3D images a day as pigs pass beneath it. Using these images, it generates weight data with a 3% error margin.

It is very important to monitor the weight of pigs, but manual weighing presents all sorts of practical difficulties, Harry said, explaining the motivation for developing the system. Unlike manual weighing, the 3D scanner is completely stress-free for the animals and requires no additional labour input, he said.

The data is readily available to farmers in ‘real time’ and allows them to monitor progress of pigs, for example growth rates and feed conversion ratios, and respond quickly to any problems that arise, as shown in the data. The system also enables producers to rapidly gauge the effectiveness of any changes made to in management of the pigs. 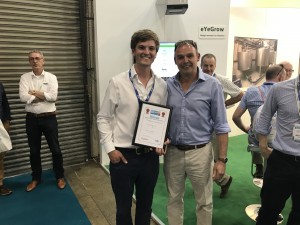 The eYeGrow took four years to develop with the first system installed on Harry’s farm. The product was recently launched in the UK and has been installed on a handful of farms.

“We need to know about weight continually throughout the process as historic data is no good,” said Harry (pictured left, with NPA chairman Richard Lister, below the scanner) .

He said he was delighted the product had received this recognition. “It’s nice to have something that can change the industry,” he added. “I’m really passionate about that.”

The judges were looking for a new and original product that has the potential to deliver long-term benefits to the industry from an excellent and varied shortlist.

Mr Lister said: “This was a clear and deserved winner – a product designed by a farmer for farmers to address a difficult problem – the need to constantly monitor the weight of physical pigs. The eYeGrow 3D scanner provide is able to collect this very valuable data with no stress to the pigs or extra effort for staff – we were also impressed with how the data is made available in a user-friendly way to the producer.

“This is a very exciting product that could deliver real long-term benefits to the pig industry.” 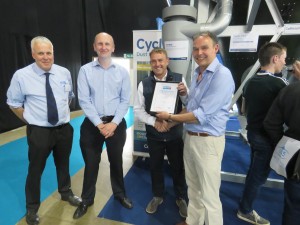 The runner-up was a simple and practical biosecurity management tool from Collinson. The Cyclone Bio collects dust generated when filling silos, eliminating dust around the base, which would otherwise attract wild birds and vermin, bringing disease risk

The cyclone is mounted on the silo leg and connected to the exhaust pipe via a hose. A robust slide enables straightforward emptying after filling.

The judges presented the company with a ‘Highly Commended’ certificate on the stand.