However, the uplift was not recorded across all pork categories. Sales of bacon have suffered, with volumes falling by 6% compared to last year. Sausages and cooked sliced meats have also declined on the year. 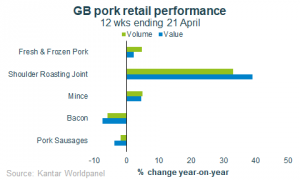 AHDB analyst Felivcity Rusk said: “The positive performance of fresh and frozen pork, and the large uplift in shoulder roast joints were almost enough to compensate for the decline in sale volumes in the other pork categories. As a result, total pig meat sale volumes only recorded a marginal decline (-0.2%) on the year.

“However, the average price per kilo for pork has fallen by 2% on the year. Therefore, is it not surprising that with relatively flat sales volumes that this had led to a 2% fall in value compared to last year.”