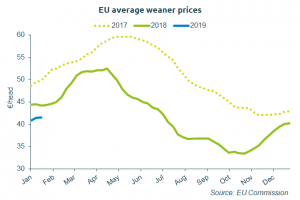 Mr Wyatt added: “However, that being said, the performance of weaner prices has been mixed across different European markets. Over the last three months prices in the Netherlands, an important producer of weaners, have risen by €16.50 to €31.00/head in the week ending January 20.

“Spanish weaner prices have risen over the same period too, gaining €17.89 to reach €44.75/head. This may be in response to an anticipated expansion in abattoir capacity, where investment has been underpinned by growing export demand. Germany has experienced a more modest price increase in the last three months (+€9.80 to €42.50/head), but elsewhere in Europe weaner prices have been more lacklustre.

“Several countries, including Denmark and Poland, have reported price declines. This could reflect some weakening of demand from Polish finishers, who are key buyers of Danish weaners.”