The average price of exports to China has continued to rise because of this, and increasingly compares to traditionally higher value markets. 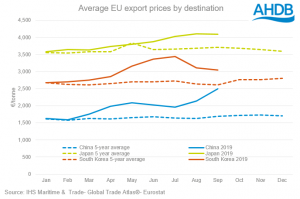 EU pig offal exports also performed strongly, as volumes rose by 13% year-on-year to 117,900 tonnes. The Chinese market continues to dominate, with volumes up by 29%. The value of offal exports rose by 43% in the latest month, to €169.9 million.