Marginally higher carcase weights resulted in pig meat production across the year to date being down by 2.5 per cent compared to a year earlier at 9.47 million tonnes. Production in May alone was nearly 7 per cent lower year-on-year. 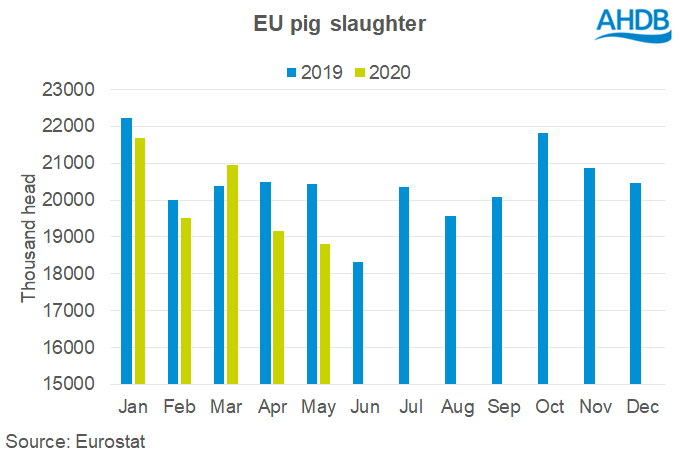 Ms Wilkins commented: “Despite the overall downward movement in May, there were contrasting trends in different member states. Some countries that had faced disruption in April continued in the same vein; German throughput was 7% lower than last May and Italian slaughter was down by 17%.”

Elsewhere, the Netherlands and France recorded larges fall for the first time of -28%, and -14% respectively. The scale of the decline reported in the Netherlands is larger than elsewhere, and while it is certain that pig throughput was affected by coronavirus outbreaks in abattoirs during the month, the decline is perhaps a little overstated.

She added: “In contrast, throughput was somewhat higher on the year in Denmark, Spain, and some of the smaller pig producers. Danish kill in May was up by nearly 2%. With falls earlier in the year though, Danish slaughter for the year to date was stable overall.”