In the latest week’s data ending 25 July, the EU average price was around 130p/kg, more than – 30p lower than the UK reference price. 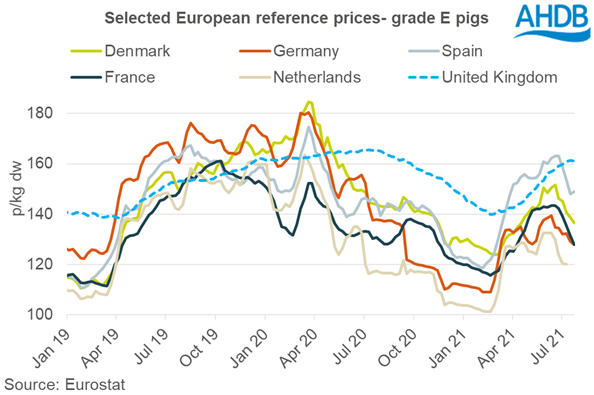 Prices are, however, still just above year-earlier levels, although Mr Wyatt pointed out that high feed prices will mean the same cannot be said for pig farm profitability.

The German market intelligence organisation, AMI, continues to report that demand for German pork remains low, with persisting reductions in out-of-home demand due to coronavirus restrictions.

German slaughterhouses have reported suffering from negative margins and have been demanding significant price discounts, said Mr Wyatt, adding: “Against this background, the supply of pigs seems to be increasing, although remains low overall.”

In  the rest of the EU, AMI reports that supplies of slaughter-ready pigs remain small, while demand in general is also subdued. Prices in Spain have been softening, which could possibly indicate weakening prospects on the EU’s main export market, China, following Rabobank reports that Chinese pork prices are now low enough to deter some imports.

Mr Wyatt added that in he UK, price gains in the SPP have been slowing recently: He said: “Some plants have cut killing days as they struggle with staff numbers, and EU product is becoming increasingly discounted to domestic pork. It is very hard to imagine that the GB price measure will not start to post declines soon.”