This, she said, is not surprising considering that around 60% of the pig meat consumed in the UK is imported from Europe. 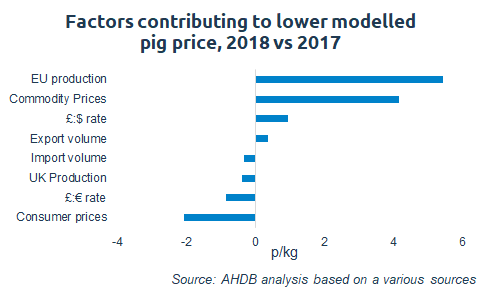 Ms Wilkins added: “Global market factors have also been important, with food prices generally falling across the world in 2018. The FAO Food Price index reflects this, dropping from 174.6 in 2017 to 168.5 last year. Falling global prices for meat and other commodities seem to have filtered through to GB pig prices as well.

“Looking specifically at the downward trend in place since July, this is partly due the usual seasonal fluctuations in the supply and demand balance. Pig prices traditionally decline in the second half of the year as production picks up ahead of demand levels. The continuing high level of EU pig meat production emphasised this downward pressure.”

Low pig prices are also associated with higher export levels. This will partly be because lower pig prices enable UK product to be more competitive on the global market, facilitating higher export volumes.

“Looking forward, EU production is likely to remain relatively flat this year. The breeding herd has declined but productivity improvements may compensate. Based on the model, prospects for GB pig prices therefore might not be significantly different this year.”