However, since April, its exports to customers worldwide have doubled, including a surge in demand for its premium bacon and sausages in the Middle East and Asia. This was after the business sought support from DIT to ramp up its exports to supermarkets in Singapore, Hong Kong and Malaysia.

Owner Fergus Howie said international trade had provided a lifeline during the pandemic. “Our exports would usually account for 20% of sales, however since April we have been able increase them to 40%,” he said. 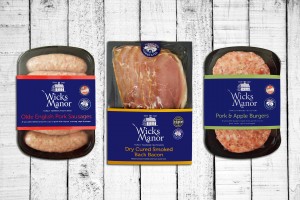 “The importance of diversifying our sales across different markets has been laid bare during this difficult time. We are now focused on maintaining export growth while preparing to return to supplying pubs and restaurants.

“We’re grateful to the Department for International Trade for the support they have provided in securing new routes to market, and I would certainly encourage other UK food producers to do the same.”

Wicks Manor’s pigs are either born and bred on the farm or sourced from local East Anglian rearers. They are fed grains grown on site, and the pork is then prepared and packaged at the family butchery, allowing the company to maintain complete control over the production of its meats from start to finish.

The business started exporting in 2010, when it secured a contract with a supermarket in Dubai. Since then it has expanded to 10 new markets in Asia, Middle East and Europe, where its products are especially popular with British expats missing a taste of home.

Thanks to the recent export growth, the family business has been able to maintain nearly a full staff count of 45 employees and avoid food going to waste during the pandemic.

Ms Truss said:  “Even in these challenging times, businesses like Wicks Manor are showing that there is clear appetite for British produce around the world.

“Exporting will play a vital role in the UK’s economic recovery from the Coronavirus, and my department is committed to delivering greater export opportunities for UK businesses through new free trade agreements.

“Now, more than ever, we need UK businesses to follow in the footsteps of exporters like Wicks Manor and showcase their produce on the world stage”.

In 2019, exports of bacon, ham, sausages and related products were worth £107.4 million, an increase of 9.3% compared to 2018. Pork exports have remained strong this year, 2% up on 2019 in the first four months of the year, driven by further growth to China, which accounted for half of all UK exports in April.

Last month, the UK Government announced that it intends to pursue accession to the Comprehensive and Progressive Agreement for Trans-Pacific Partnership (CPTPP) as a key part of its trade negotiations programme.

It said this would help the UK economy overcome the unprecedented challenge posed by coronavirus, including by opening up new opportunities for UK exporters in strategically important sectors.