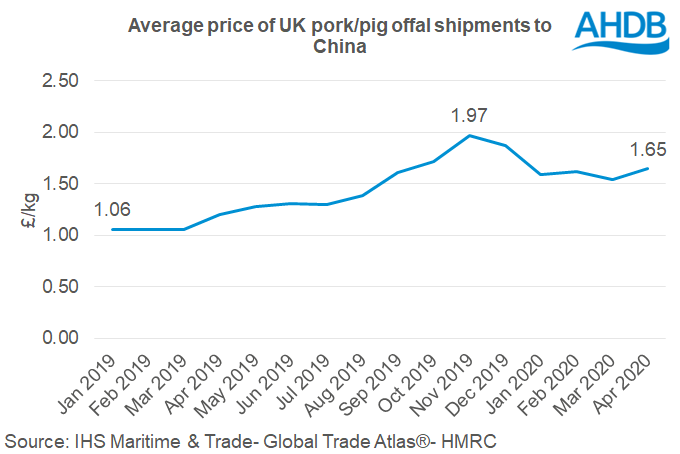 There was a declining trend among EU markets with Ireland and the Netherlands purchasing less UK pork.

Exports of sausages in April recorded a very strong increase on the year, apparently due to rising trade with Ireland, which was over five times higher than last year.

Ms Wilkins advised that a sharp increase should be viewed with caution: “however, Irish import figures do suggest sausage shipments from the UK were about 25% higher during the month.

Pig offal exports also remained strong, with 5% growth on the year. China again provided the support (+32% year-on-year), though falling volumes to other destinations, including the Philippines and the EU, slowed the overall pace. 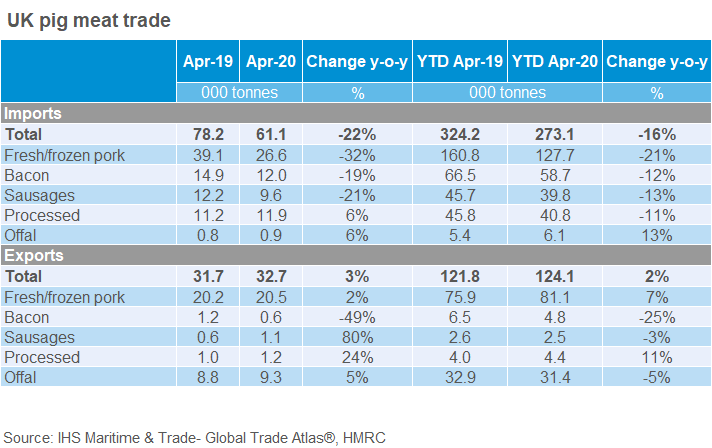 UK fresh/frozen pork imports continued to fall in April. Frozen shipments in particular were down by 63% (-7,000 tonnes). Fresh/chilled product also dropped by 20% (-6,000 tonnes). The figures indicate weaker demand for European products, likely affected by foodservice closures. The only supplier to send greater volumes than last year was Germany, with these imports up 11% (+800 tonnes).

Ms Wilkins commented: “Processed meat imports were more similar to year earlier levels, with Poland and Spain in particular sending more. This was somewhat counteracted by falling volumes from the Ireland, Germany and Denmark though.

“Import prices remain higher than year earlier levels, so the value of imports overall was only down 12% on the year, at £186.6 million.”