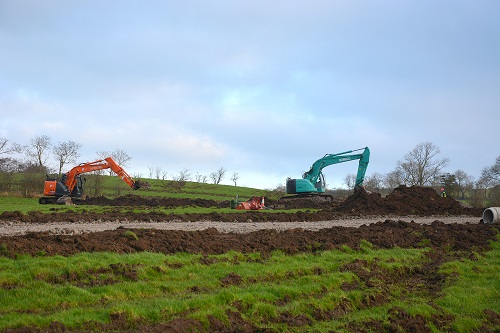 “The enabling work has started,” said Mr Hall, adding that the site where the farm is being built extends to 30 acres with the new building taking place on around 20% of that.

“Currently we have 900 sows and these will be kept at our existing farm. When the new farm is completed there is the potential to increase the sow herd to 1,500, but only if it is required.

“We are also building a 500 kilowatt anaerobic digester which will take the odour emitting gases from the slurry thereby significantly reducing odour, and convert them into energy.

“This energy base will be used to power the farm. The digester also produces heat which will be used in the pig houses in order to create a better environment for the animals.”

Planning permission was passed by councillors, some of them farmers, at a sitting of Antrim and Newtownabbey Borough Council Planning Committee in November 2016 where nine councillors voted in favour and two opposed the development. The vote followed extensive local opposition, backed by several celebrities, including Queen guitarist and animal welfare campaigner, Brian May, as well as actors Martin Shaw and Jenny Seagrove.

Headline image is an artist’s impression of the finished development.