“With BCA being situated in the heart of Berkshire it seems fitting to have the pigs back on campus since the college has been without the breed since 2006,” said BCA animal centre manager, Calvin Allen, adding that the college has plans for showing the pigs in the future, as well as contributing towards conserving the breed. 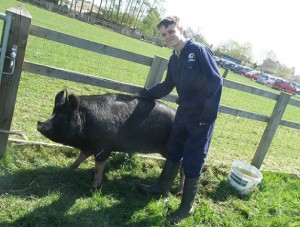 BCA animal care student, Darren Wicks, with one of the college’s new Berkshires