Total pig meat imports for the first 10 months of 2020 were valued at £2 billion, a decrease of 4% on the previous year. 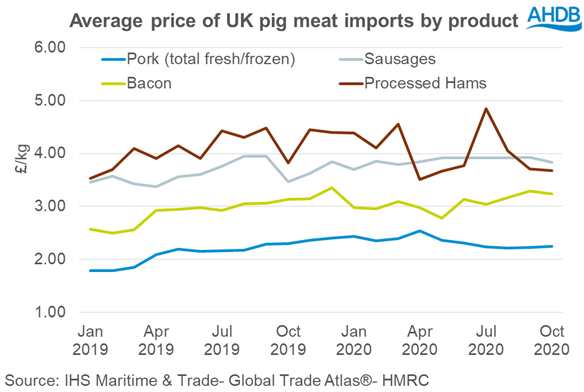 When offal is included, UK pig meat exports were 3% up during the first 10 months of the year, with shipments to China up a huge 43%, but exports to other destinations, including Ireland (-14%) and Germany (-3%) falling.

Conversely, exports of fresh/frozen primary pork were 9% lower than last year at 23,000 tonnes. Although exports to China were still 17% higher than last year, volumes to most other destinations declined.

“China is currently working to rebuild its domestic pig herd, which may ultimately start to limit the amount of UK exports sent to the region in the future,” Mr Reeve said.

Pig meat (including offal) exports were valued at £62 million during October, a decline of nearly 4% year-on-year, despite the increase in export volumes. This reflects both a decline in average prices for fresh/frozen pork compared to last year, and an increase in the proportion of exports that were lower-value offal products.

“Nonetheless, despite not reaching the highs of last year, average export prices across pig meat and offal products during October were still the highest since March,” Mr Reeve added. 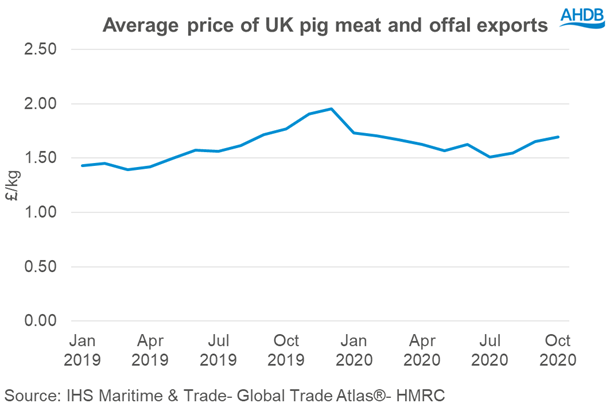