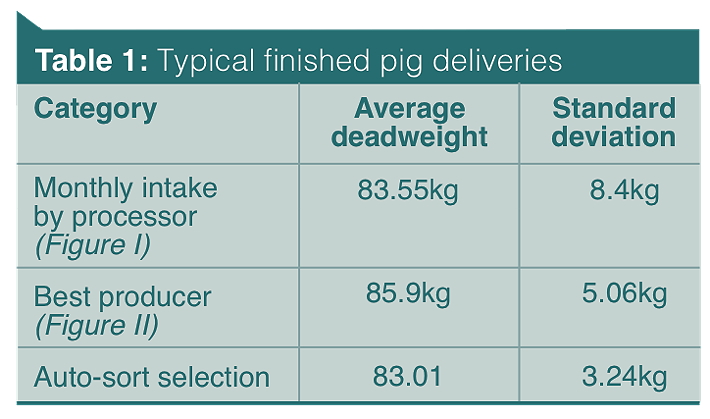 The latest weekly kill achieved 83kg deadweight with an average P2 of 11.6mm, and so shows that there’s an opportunity for more kilograms to be sold per pig. This extra weight, irrespective of the extra costs for feed and housing and so on will be generally cost effective (there’s more on this in the AHDB Pork Knowledge Transfer Bulletin 21 found at http://pork.ahdb.org.uk).

When reviewing the abattoir return, there are key figures to check (see Action for Productivity factsheet 22). First, the average weight of the batch. The maximum average sale weight targeted by each unit could be a reflection of the number of finishing places available, or chosen to control the average P2 of the finished pig so as to give the optimum return. The actual weight achieved should be routinely benchmarked against the target.

However, the standard deviation is one of the key figures to check, as this is a measure of the variability of the batch of pigs. As shown in the table 1, batch A had an average weight of 83.55kg and a standard deviation of 8.4kg, showing that 68% of the pigs had a deadweight of between 75.15kg to 91.94kg, a 16.8kg spread (batch B achieved only a 10.1kg spread). However, this also shows that 32% of batch A were still outside these weights. Great if they’re heavier and in-spec, but not so good if they’re lighter, possibly reflecting the poor selection of pigs and also the extent of pen weight variation. 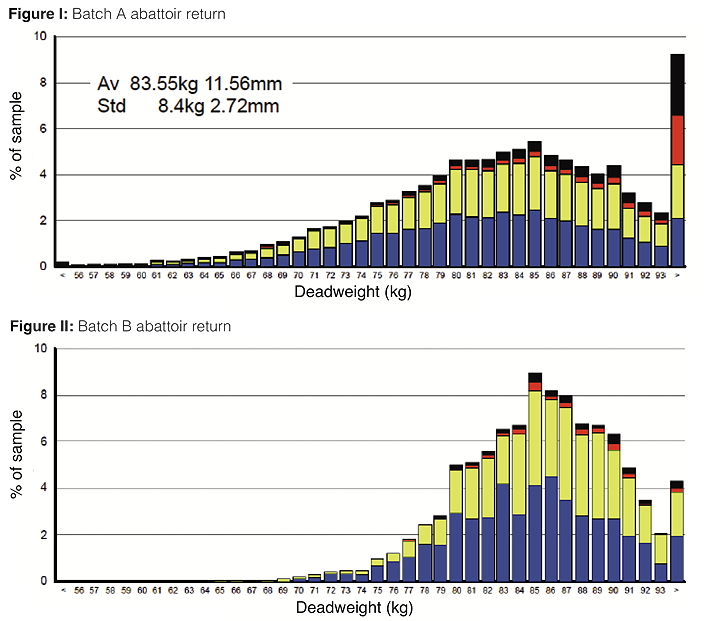 Natural variation
John Richardson stated that pig weight variation is part of life, starting from piglet birthweight and then subsequently being influenced by genetic line, health status, housing, nutrition, season and stockmanship. How do we manage this variation? We know problems due to seasonality occur every year, so can we introduce some interventions or change how the pigs are managed to help to reduce them and keep pigs growing? Will sorting pigs by size at weaning or grower stages be beneficial? He concluded that available research projects failed to show a clear advantage of sorting pigs on within-pen variation; but, where there’s an opportunity to size by room, this can improve clearance rate and so throughput.

Where this cannot be adopted, what should the strategy be for managing larger batches of finishers on an all-in all-out system? He presented a financial case for targeting a batch clearance over a maximum four-week period when selling weekly draws, maximising weight out of the main draw pigs and selling the tail ends lighter through the four-week period, but ultimately releasing the house sooner for a new batch to start (more on achieving pen uniformity can be found in Action for Productivity factsheet 11).

Selecting pigs for sale
So how do we select the pigs for sale? During the meetings a survey was conducted to ascertain producer’s main criteria and methods for selecting their pigs. More than half (51%) said they selected by eye alone, with more than half of those (54%) stating this was because of a lack of time or spare labour.

Selecting by eye will depend on the skill of the selector. It can work well, but it has more risk involved than selecting by either in-pen technology or through manually weighing pigs. Oli recommends that producers try to select on the same day of the week with the same operator, sell on the same day and then check the abattoir return with all personnel involved.

Knowing the herd’s daily growth rate and regularly checking the killing out percentage by using a weighbridge will hopefully prevent nasty surprises. Clearly, however, the barrier identified by the surveyed producers to adopting weighing pigs is time and labour. However a cost-benefit analysis could encourage them to look at this in the future. Another criteria identified when selecting pigs was the need to empty pens. The continual improvement in breeding herd performance is possibly placing an increasing downward pressure on sale weight for some units until remedial actions have been introduced.

Grading penalties
Another key figure to check from the abattoir return is the penalty per kg deadweight incurred through pigs being out of spec. From Table 2 you can see that no penalties have been incurred through incorrect weight, but grading, especially with the gilts, has cost more than 2p/kg overall. Could this be reduced through the benefits of split-sexing and subsequent nutritional management and/or a reduction in sale weight selection for gilts? 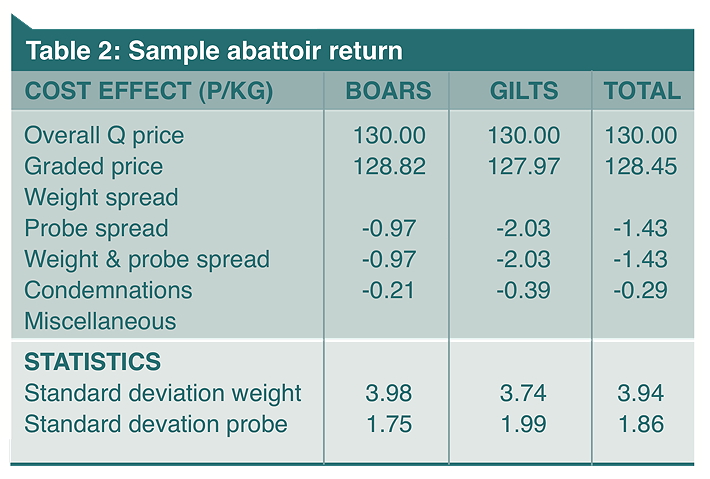 Oli concludes that Regularly Reviewing Practice should be adopted, that is checking finished weights against target weights and their spread, room/batch clearance rates, and probe data. In addition, knowing the bottlenecks in the system and the expected numbers coming through, and actively monitoring the average daily liveweight gain of the finishing herd to help predict days to sale, will all help producers maximise their income.

Angela Cliff is AHDB Pork's knowledge transfer manager for the Midlands. She joined the levy body in 2006