Based at Saffron Walden, just 50 miles as the crow flies from AMA’s Saxtead base, Dosing Solutions has been supplying the poultry sector for years. Now, it’s also moving into the pig sector, with Mr Maskery’s firm taking on the role of distributor for Great Britain.

“Adding dosing equipment to our range was an exciting development. The technology is definitely new, it’s reasonably small and it’s simple,” Mr Maskery said. “And when we took it to our customers to see if they were interested in it, they were.” 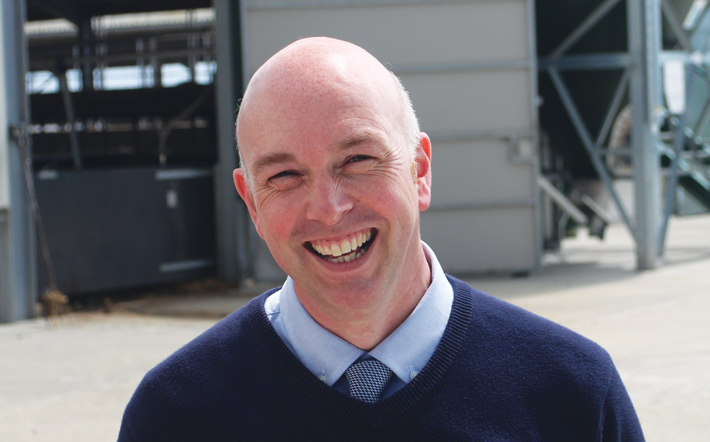 While the idea of using dosing pumps in the pig sector isn’t new, the Dosing Solutions equipment tackles it in a novel way. Using a peristaltic pump (that essentially consists of a pair of rollers applying pressure to a semi-circular plastic tube to push the contents through at a constant rate and pressure) has a couple of major advantages compared to traditional pumps. The first is accuracy, but almost more importantly the product being pumped only comes into contact with the tube and never gets close to the working parts of the pump. This also means that removing the old tube and fitting a new one effectively cleans and renews the pump (something that it’s recommended is carried out once a month).

The timing of this new product offering couldn’t really have been better. With pressure growing to reduce antimicrobial use and the future of medicated feed uncertain, interest in using water as a delivery route for antibiotic treatments is definitely increasing. It’s fast and accurate, and more reliable in that pigs will tend to continue to drink even when their appetite is suppressed. And, as the dose rate is linked directly to the pigs’ water intake, you can be assured that a therapeutic dose is delivered.

There are also more practical aspects that can’t be ignored. In modern finishing sheds, it’s not unknown to mix antibiotics into the water tanks, but this not only presents challenges in keeping the product well mixed, but accuracy suffers too. And there can also be health and safety concerns where the tanks are situated high in sheds and ladders are required to gain access.

One of AMA’s first customers to fit the system was National Pig Awards winner Paul Howland (who we featured in our May issue). He has fitted Dosing Solutions’ British-made Select-640 doser in both of the sheds where he finishes pigs for BQP. The set-up in each shed at his unit consists of the peristaltic pump, a flow meter in his water supply pipe from the storage tanks, a 25-litre closed bucket to hold the treatment and a magnetic mixer to keep the liquid that’s being used well mixed.

Using the system couldn’t be easier. Mr Howland simply checks the system to find out how much water the pigs have consumed in the previous 24 hours, then uses a series of simple on-screen menu commands on the pump to choose the best dosing ratio to get the right amount of active ingredient into the pigs in the following 24 hours.
Of course, antibiotics are only supplied to the pigs when necessary, but the rest of the time the pump dosing system is used to deliver acidified water (a 24-hour break with only fresh water going through the pipes is used when treatments are swapped).

Mr Howland’s unit has a problem with hard water (the untreated pH is nearly 8) and the acid treatment – a five-acid blend called Agrocid Super Oligo supplied by AMA – has helped reduce scour that the hard water used to promote, and has arguably increased feed intakes as there are suggestions that pigs like the acidified water and will drink more than usual, thereby promoting feed intake.

Another benefit of using the acidified water is that it can help keep biofilm at bay, meaning the water supplied to the pigs tends to be cleaner and healthier than untreated water. 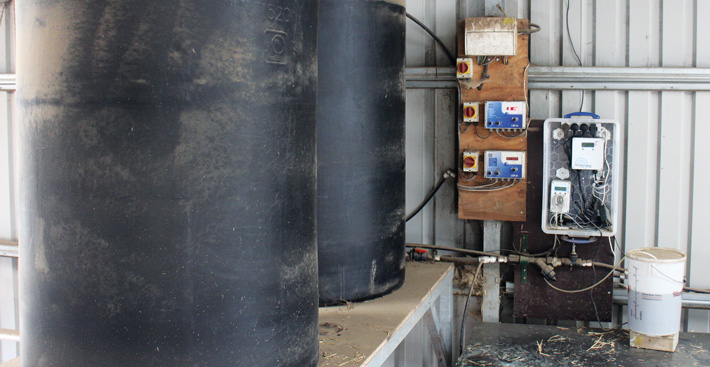 Environmental monitoring
Dosing Solutions also developed the General Alerts environmental monitoring system, and this has also been added at AMA’s offering. Again commonplace in the poultry sector, Mr Maskery was first to introduce the system to UK pig farmers, and it has been identified by BQP as a useful piece of equipment for its contract producers.
Paul Howland installed his General Alerts system at the end of December last year and has found it invaluable in managing his finishing sheds. His installation monitors water use (sharing the flow meter used by the dosing system); the ambient temperature in the sheds (via three dedicated temperature sensors); and feed intake (measured by the time the auger has to run to fill the feed bins).

The General Alerts control box is linked to the internet by a 3G mobile ’phone signal, and constantly uploads the data it collects so that Mr Howland can monitor the shed’s performance via a website control panel. But as the system’s name suggests, it can also send warnings direct to a mobile telephone by text message should anything out of the ordinary occur.

On Mr Howland’s unit, there are alerts set up to let him know if the sheds get too hot or too cold; if the water flow is higher than expected (suggesting a water leak); or if the feed augers run longer than expected (again suggesting a fault of some kind). The system has already alerted him to high temperatures in one of the sheds, which caught him by surprise.

“I didn’t believe it at first because the system was reporting that the temperature was more than 30C in the shed on a sunny spring day,” Mr Howland said, “but when I went to check, I found the wind speed was so high it had overridden the curtain controller and prevented them being opened to keep the temperature at comfortable levels (the units aims for 21-23C). A quick adjustment of the curtain controller sorted everything out before it affected the pigs performance.” 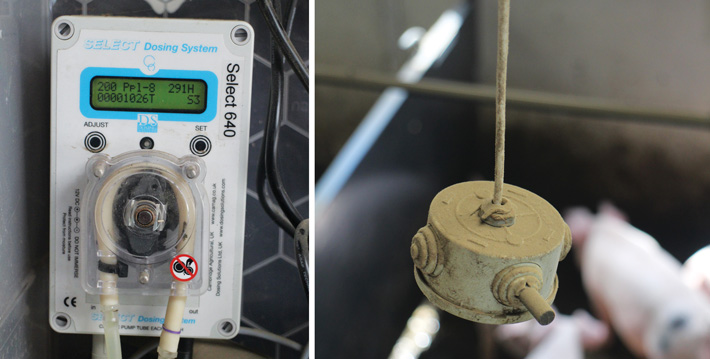 Mr Howland is still getting to know the system, but is already able to look at the graphs it produces and spot where, for example, the feed has changed or where performance has dipped as a prelude to disease outbreak. The next stage is building standardised curves for the units that will allow him to get an early warning of disease if actual production (in terms of water consumption or feed use) varies from where it should be.

He’s also keen to extend the system by adding more sensors. For example, he’d be interested in monitoring water consumption at a pen level to compare the performance of pigs situated in different parts of the shed.

Affordable technology
This high-tech equipment may sound expensive, but is actually remarkably affordable. AMA sells the Dosing Solutions pump and flow meter for a bit less than £600/shed, while the General Alerts system costs about £1,500 (plus £300 for a water flow meter if there isn’t one already installed). Installation, if required, costs extra.

Mr Maskery says the dosing system is very easy to install in modern buildings, but can be more challenging in an older set-up. And as far as the General Alerts system is concerned, one box can run several buildings. At Paul Howland’s unit, for example, a slave data unit in his second shed is linked to the first by WiFi, helping to reduce the overall cost.

Sharps disposal and contaminated plastics
It’s obvious that used veterinary needles and medicine bottles shouldn’t just be thrown in your recycling bin, but what about empty AI containers? In many cases, the semen is now supplied with an antibiotic additive that means the pouches should be treated as hazardous waste and not just thrown in with the household rubbish. In any case, now that recycling waste is sorted by hand in many areas, it’s been anecdotally reported that waste transfer site staff have complained about having to deal with this distinctive piece of farm waste. 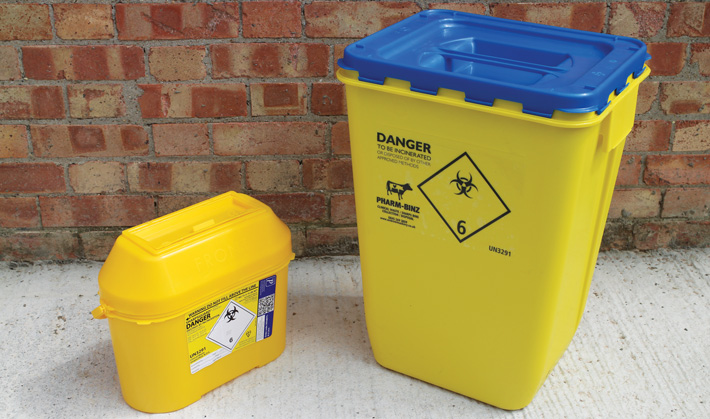 AMA runs the Pharm-Binz service, which has been designed to help farming businesses to dispose of empty vaccine, antibiotic and wormer bottles as well as sharps and other farm waste in a convenient way. The service is based around distinctive yellow boxes that securely hold the waste until it is collected and removed from the farm for incineration.

One of the major advantages for the Pharm-Binz service is that it supports your business’ farm assurance compliance in a cost-effective way. Yes, you can return empty packaging to your vet, but it can be difficult to then get the necessary transfer documentation to satisfy farm assurance schemes.

Users of the AMA service get a waste transfer note whenever their bins are collected. This complies fully with the farm assurance requirements of Red Tractor and RSPCA Assured, and the service comes with affordable set fees. It’s estimated that a 500-sow herd will fill about one large bin every month.