“Many of our customers have described the Geneconverter 900 as a major game changer for them where they’ve seen improvements of 60 to 100g/day increase in growth rates without any impact on feed efficiency,” the company’s UK sales director, Giles Christie, says.

JSR introduced the Geneconverter 900 into its studs back in September 2013 after a very successful trial through Harper Adams University pig unit. The trial, conducted against some of JSR’s older sire lines, as well as some of its competitors, demonstrated it was 13 days quicker to 40kg and 18 days quicker to 100kg than the best of the rest on the standard compound feed rations at Harper Adams. It was, therefore, a relatively easy decision to use the Geneconverter 900 on JSR’s commercial pig farms as well as selling it to the rest of the industry. 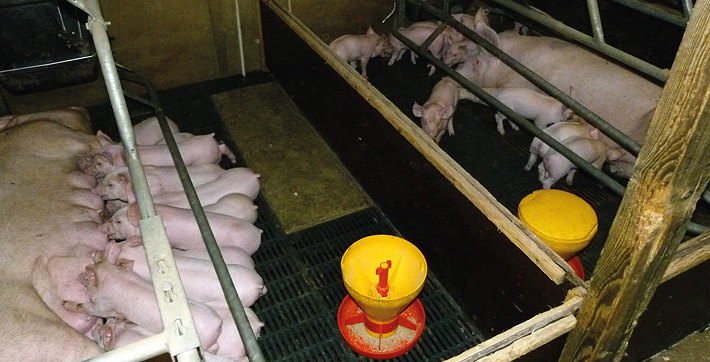 JSR Haywold is the company’s largest commercial breeding unit where it uses the Geneconverter 900 on the Genepacker 90 indoor female. The farm runs 2,500 sows with all progeny leaving the site at weaning. Breeding performance of the unit is good with a farrowing rate of 89%, born alive of 13.6 pigs per litter and weaning 11.8 pigs per litter. The farm farrows 100 litters every week with a target to produce 1,200 weaned piglets.

Weaning weights
The first impact of the Geneconverter 900 was the effect it had on weaning weights. These have increased to 7.7kg at 26 days of age; which is half a kilo heavier than the previous sireline.

“The first thing we noticed was that the birthweights were higher and the consistency of the pigs being born was better,” farm manager Rob Campbell says. “This resulted in us having to do less fostering; after the first 48 hours very few piglets are moved at all.

“They’re also very vigorous eaters, even in the farrowing room, which after some trials has led to us using a specific regime for feeding creep to the pigs. With two specifications of creep and two types of feeder, we now have a standardised regime that allows us to get half a kilo of creep into each pig before weaning. We hardly see any post-weaning drop in performance since the introduction of the optimal creep feeding.”

JSR’s technology transfer specialist, Richard Riley, says the combination of creep regime and genotype benefits not only the animal, but also business profitability.
“By increasing the weaning weight by half a kilo the animal reaches slaughter weight on average three to four days quicker,” he adds. “High-specification creep rations can look expensive at about £1,500/t, but feeding this at a time when the animal eats only small volumes of feed and converts it very efficiently is cost-effective. 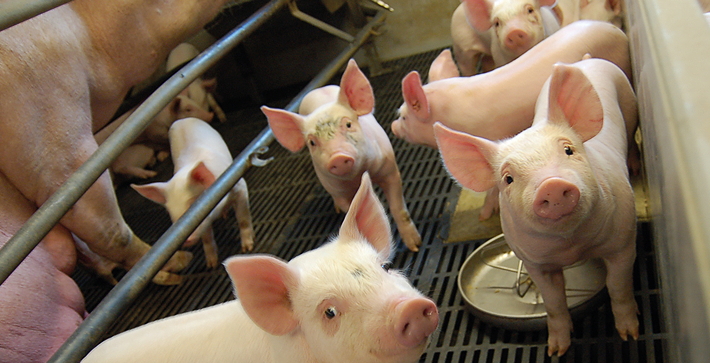 “By decreasing the number of days to finish by three or four, the saving in feed and space compensates for the earlier cost, or alternatively the animal could be sold at the same age but heavier in weight. Not only that, you’re allowing the animal’s gut to develop the villi needed to digest solid food prior to weaning.”

This creep regime is not solely beneficial to the Geneconverter 900; JSR has had some customers who’ve applied it across other sireline genotypes and seen vast improvements in the weaning weights and pig performance post weaning.

After leaving JSR Haywold, Geneconverter 900 progeny move to JSR’s state-of-the-art, fully environmentally controlled Decoy and Fimber units. The 1,200 pigs from each batch arrive at Decoy into the nurseries; at 30kg, the 400 largest pigs are taken to Fimber, with the remaining 800 staying at Decoy.

At the Decoy unit, the pigs are split sexed into two pens of 400 when they move to the finisher building. Work at both Decoy (see table 1) and at Harper Adams University has demonstrated different performance and genetic potential between the two sexes, and for customers able to feed different diets to each sex, so there are further savings to be made.

Meanwhile, the Fimber unit is still in its infancy with the initial batch from Decoy showing growth rates of 954g/day from 29 to 55kg. In contrast to Decoy, Fimber doesn’t have the large rooms, but instead is running 33 pigs per pen. However, the common theme across both sites is the Crystal Spring feeders with home-produced meal.

Diet change
JSR’s commercial herd production manager, Nigel Pritchard, is clearly a fan of the Geneconverter 900, which is adapting well to the company’s recent change from compound feed to home-milled meal.

“Since changing to the Geneconverter 900, our animals are two weeks quicker to slaughter across the commercial business,” he says. “This gives us the option of taking pigs to heavier weights or freeing up finishing space, both of which are beneficial to our operation.”

A pen of finishers at JSR’s Decoy unit

Nigel feels that one of the largest changes he’s seen has been with the appetite of the pig on the home-produced feed.

“The Geneconverter 900 progeny just love to eat; the appetite they have throughout their life without compromising efficiency is excellent. We’re now close to being able to reach 90kg deadweight across our business, while backfat remains at 11.3mm. On the meal, the pigs have performed better than we could have imagined: the reason behind producing our own feed was a cost-driven exercise, but growth performance has also improved and the behaviour of the animal is a lot more settled which has led to a drop in mortality.

“Overall, we’re extremely happy with how the Geneconverter 900 progeny have performed and what it’s done for our business.”

What’s also clear is that the good performance seen with this sireline is helping drive more producers to place more focus on the finishing herd and collect valuable data on this all too often neglected side of their businesses.