Police officers did attend the scene but later said no criminal action had taken place.

A PSNI spokesperson said: “Police received a report of a protest involving a number of people at a farm in the Cloughmills area around 4.30am in the morning.

“Police attended and spoke with the protesters who left the property shortly before 7am. There were no reports of any criminal offence during the incident.”

The Department of Agriculture, Environment and Rural Affairs (DAERA) sent inspectors to the farm to investigate claims from the group that the animals were being kept in poor conditions. 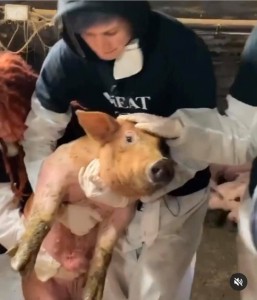 A spokesman said: “DAERA is aware of an incident during the early morning of Tuesday 14th Jan on a pig farm in County Antrim. DAERA inspectors followed up on the incident and are currently investigating.

“The department is responsible under the Welfare of Animals Act (NI) 2011 in respect of farmed animals,” he said.

This farm is a member of the Red Tractor quality assurance scheme which has also launched an investigation.

Meanwhile, the owners of the farm said the pigs were kept in appropriate conditions and that they were ‘healthy, well fed and warm’.

The owners also pointed out that the action by the activists had created biosecurity risks and voiced concern that they would be able to look after the pig they took.