“Our challenge has been to develop an electro-chemical sensor similar to those used for diabetic testing and pregnancy tests, but suitable for repeated use at speed. We’ve now achieved this and are confident we have established the fundamentals needed to produce an automatic boar taint detector for abattoirs,” she added.

The next step will be to secure investment from a manufacturer and to bring this technology to the commercial market.
With eating quality now flagged up as a critical purchase decider, and an EU ban on surgical castration looming, Dr Caroline Kealey, meat scientist with JSR Genetics, said the UK industry must act quickly to protect its position as a high quality, non-castrate pork producer.

“Our market relies heavily on imports and the UK is already seen as a destination for boar meat. It’s likely the level of tainted pork in our supply chain will increase. This threat from imported pork could seriously damage our domestic market,” she said. 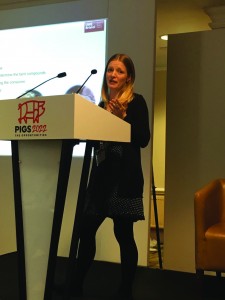 Such a policy, she said, would add significant value to the sector, improve consumer commitment to its products and strengthen the UK pig industry’s global marketing position post-Brexit and beyond. Asian palates are more sensitive to boar taint and the UK’s non-castrate policy has sometimes negatively influenced sales potential in these lucrative and expanding markets. Gilt meat is the preference here, although delegates were surprised to learn females can also express ‘taint’.

“All pigs, including castrates, produce skatole – it’s a key component of the ‘odour’ complex,” said Dr Kealey.
A by-product of amino acid synthesis (Tryptophan), skatole is less offensive than androstenone, a male-only pheromone. However, when both compounds ‘combine’ in fat tissues the taint effect is exacerbated.

“Skatole can be absorbed through the skin, and certain production systems where pigs might wallow or lay in dung might potentially increase the risk of taint occurring, so management techniques should be considered particularly if rearing mixed-sexed groups,” said Dr Kealey.

Studies show that stocking density and the age of the housing are also influential factors and Dr Kealey outlined how a 13%, rather than 15%, crude protein diet, and feeding meal instead of pelleted food, could help to control skatole levels.
She also advised producers to keep tabs on days to slaughter, rather than liveweight. “Age dictates the potential for boar taint, not body weight. The longer a pig is on the farm the greater the risk it presents,” she added.

The key message from the session was that such strategies, alongside innovative technology to accurately detect inferior carcases at slaughter, should ensure a better eating experience for every consumer and greater opportunities to increase consumption levels of UK pigmeat worldwide.