“If we look at the number of pigs in the SPP sample, numbers in June were only 4% higher than a year earlier,” explained Ms Wilkins. “This is just a subset of total pig kill, so trends won’t exactly follow through to overall slaughter, but we would expect some similarity.

“The large difference between these trends over the past two months reinforces the idea that the scale of growth reported by Defra could be on the high side.” 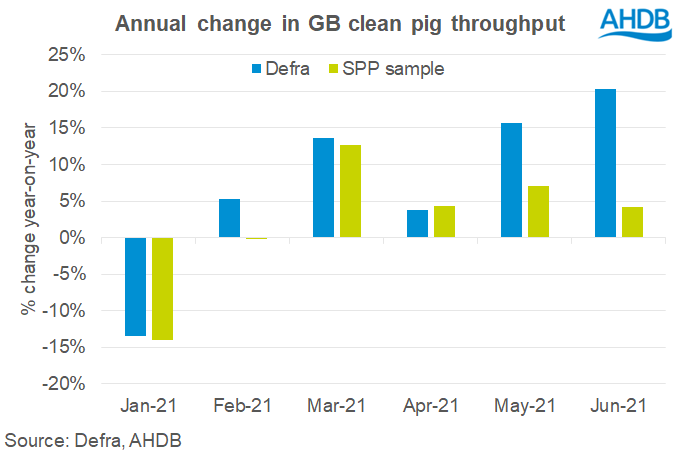 She noted that the pandemic created some challenges with data reporting, where Defra was relying more on FSA slaughter data than its own slaughter survey, perhaps leading to inconsistencies in the data reported.

Looking on a regional basis, clean slaughter in Scotand was down by 27% at 22,000 head, due to a key major Scottish abattoir has been operating on a reduced kill lately. Both Northern Ireland, and England and Wales saw increases of +8% at 165,000 head and +23% at 799,000 head respectively.

Overall, the number of clean pigs slaughtered in the first half of the year totalled 5.67 million head, up by nearly 7% on the same period last year.

“Logistical problems related to COVID-19 and our departure from the EU have previously disrupted sow throughput, so growth in numbers would be expected as producers catch-up with culling older animals,” explained Ms Wilkins.

Average clean pig carcase weights in June were just under a kilo higher than a year earlier, at 86.4kg. Adding to the increased slaughter numbers, total pig meat production in June was up by 20% on last June, at 88,600 tonnes.

And production in the first half of the year was up by 9% compared to last year, totalling 519,500 tonnes.