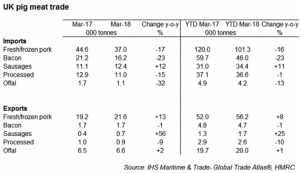 Exports to the key international markets largely recorded increases, with fresh/frozen exports to China rising by 4% (150 tonnes) compared to March 2017, to 4,000 tonnes. Exports to the US increased by almost a third (+250 tonnes), while trade to Japan (+90 tonnes) and South Korea (+50 tonnes) recorded modest increases. Shipments to the Philippines declined by 43% (150 tonnes).

Offal exports recorded a modest year-on-year increase (+2%), to 6,600 tonnes during March. Exports to China increased by 6% (150 tonnes), to 2,800 tonnes. Balancing this, exports to Hong Kong declined by 13% (150 tonnes), to 1,000 tonnes. While fresh/frozen exports to the Philippines may have declined, offal exports recorded a sharp increase year-on-year (+273%), to 850 tonnes. The unit value of offal followed the same trend recorded in fresh/frozen pork, falling to £912 per tonne, which meant the total value of offal exports was down by 6%, to £6 million.

According to HMRC, the UK imported 17% less fresh/frozen pork than last year during March. Recorded shipments fell from the three largest suppliers: Denmark (-37%), Germany (-1%) and the Netherlands (-6%). Doubts persist over the accuracy of the data, especially relating to the Danish import figure, due to strong production during the first quarter in Denmark making the sharp decline surprising. The total value of UK reported imports of fresh/frozen pork declined by 17% on year earlier levels, as the average value per tonne remained steady.

Imports of bacon declined by 24% on-the-year, to 16,200 tonnes in March, which is less surprising considering the long term trend towards processing more bacon within the UK. Although, imports from Denmark and Germany were reported to have declined by 36% and 50% respectively which may be somewhat overstated.