UK exports of pig meat increased in December, despite the fact that France shut its borders to the UK for three days, following the identification of a new variant of COVID-19. Volumes of fresh and frozen pork totalled 22,300 tonnes, 27% more than in the previous year. Offal shipments also recorded strong year-on-year growth.

In contrast, overall import levels dropped by 9% over the course of the year, to 832,000 tonnes, with fresh and frozen pork imports down 14% and bacon imports down 12%. The most significant annual declines came from the following suppliers: 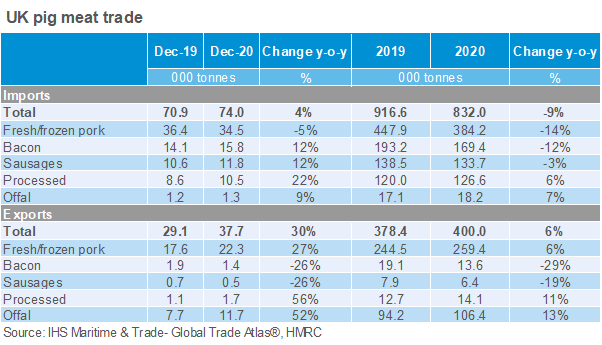 The pandemic severally disrupted foodservice demand last year. According to data from Kantar, pork volumes at foodservice were just 46% of 2019 levels, which is likely to have particularly affected import demand, AHDB analyst Felicity Rusk said.

However, import volumes were rising at the end of the year. For the second consecutive month, overall UK pig meat imports (+4%) were a little higher than year earlier levels in December. However, this by no means compensated for the significant declines recorded earlier in the year, Mr Rusk added.

The year-on-year increase was driven by growth from all the various processed pig meat products. Shipments of bacon and sausages were both up by 12% on the year, Mr Rusk said.

“Processed hams reported an even larger 22% increase compared to December 2019. Some stockpiling before the change in trading relationship with the EU at the end of the year may have influenced these trends. In the year as whole, annual changes for these products were more mixed,” she added.

Nonetheless, UK imports of fresh and frozen pork continued to track below previous year levels in December. However, the extent of the decline was considerably less than recorded earlier in the year. Volumes totalled 34,500 tonnes, 5% less than in the previous year. 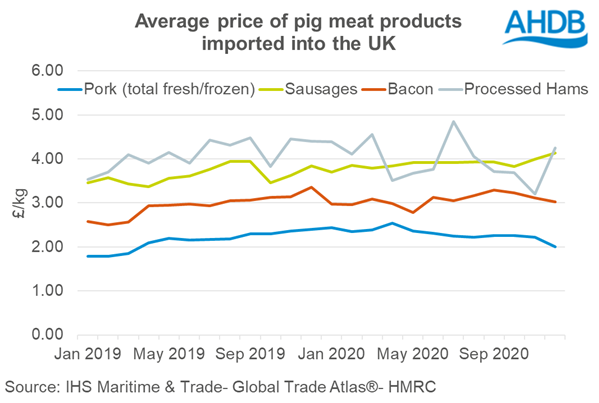 “While lower EU prices and ample supplies might be expected to stimulate demand for imported product, the impact on actual volumes coming over does not seem to have been excessive so far,” Ms Rusk added.

“This is especially the case considering low import volumes across the year overall, despite the fact our estimates suggest pork consumption rose in 2020.”