“Following further official testing swine vesicular disease has been negated and the 10km Temporary Control Zone has been revoked. The premises remains under restriction pending the outcome of further tests.”

Details of the restrictions can be found in the swine vesicular disease cases and disease control zones in England section.

APHA ruled out the presence of foot-and-mouth on Friday, but testing for swine vesicular disease continued, meaning restrictions remained in place.

On Friday evening, APHA said: “Following reports of a possible case of Foot-and-Mouth Disease we acted swiftly to put in place restrictions on the premises and collected samples for testing. Testing has allowed us to fully rule out the presence of this disease. Investigations into other possible causes continue.

“There is still an ongoing investigation into other vesicular diseases of pigs. Further testing is being conducted to rule out their presence. The 10km restriction zone will be replaced by a similar zone applying only to pig farms while disease investigations continue.”

APHA imposed the original zone and began testing for diseases, including FMD and SVD, as a precaution after certain symptoms were reported in pigs on a premises Near Feltwell, Kings Lynn and West Norfolk, Norfolk.

According to Defra’s website, the last outbreak of SVD in Great Britain was in 1982.  The clinical signs, which can be confused with FMD, include blisters (vesicles), which appear at the top of the hooves, between the toes and occasionally on the snout, tongue and lips

Other clinical signs include lameness due to foot blisters, loss of appetite and fever, while some infected pigs may not show any signs of the disease.

The disease can be spread by:

You can view more information HERE 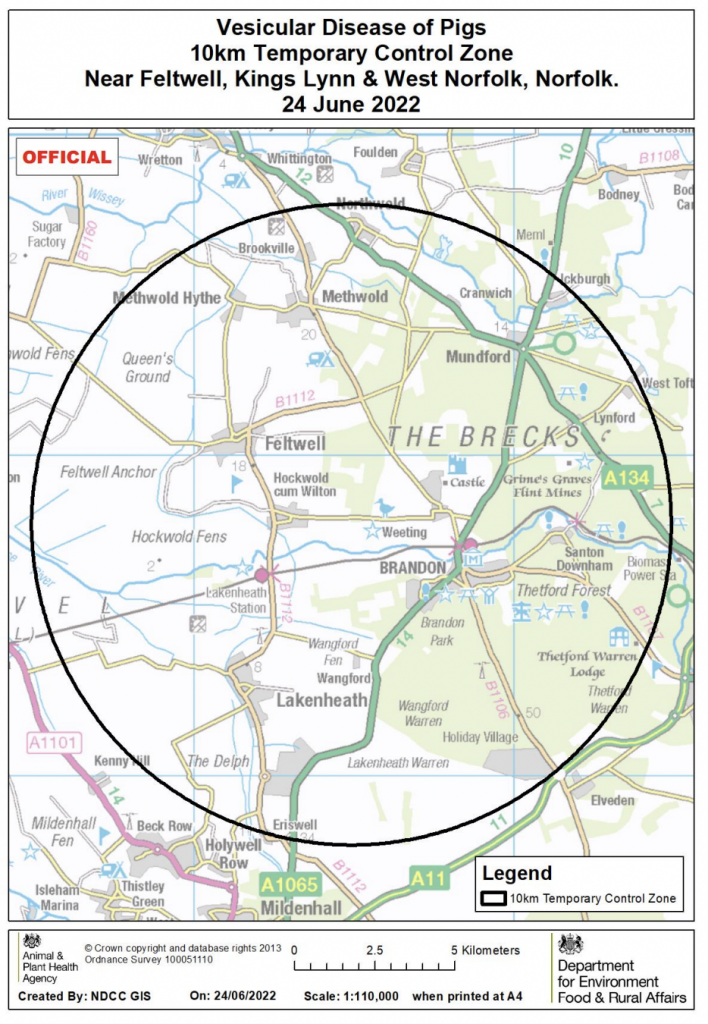 You can check if you are in a disease control zone on APHA’s interactive map.

In Temporary Control Zones, certain movements of animals, animal products, animal by-products or materials associated with their keeping, are not permitted.

General licences are not applicable for the movement of anything to or from premises which have been served a restriction notice by the Animal and Plant Health Agency (APHA).

No other general licences have currently been issued.

Movements are not routinely licenced in Temporary Control Zones. If you cannot move your animals using the above general licences and this causes exceptional hardship, then you can seek advice from: [email protected].