As heatwaves become more commonplace, Sarah Verity, of Farmers and Mercantile Insurance Brokers (FMIB), has urged farms to not overlook the effect of rising temperatures on livestock and to take precautionary measures against heat stress.

She said: “Farming is a weather dependent industry, acutely sensitive to temperature extremes, so the summer can be an extremely worrying and testing time of year for farmers.  Harvest often takes precedence in these critical months.

“Of course, the wellbeing of the livestock is also top priority for farmers, but it takes just a few extra degrees, over a relatively short period of time, for animals to suffer the effects of heat stress – it can happen quickly and without much warning.” 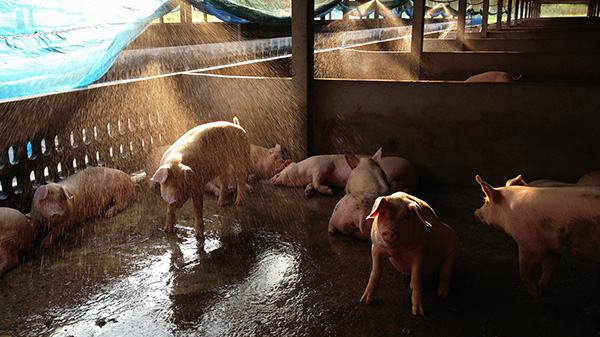 Pigs are much more sensitive to heat than other animals

Ms Verity said that pigs are much more sensitive to heat than other animals because they lack the ability to sweat.

“Signs of stress in pigs include open-mouth breathing, vocalisation, blotchy skin, stiffness, muscle tremors and reluctance to move,” she said. “If pigs begin to demonstrate these symptoms, allow them to rest, keep them cool with fans and have access to plenty of water.