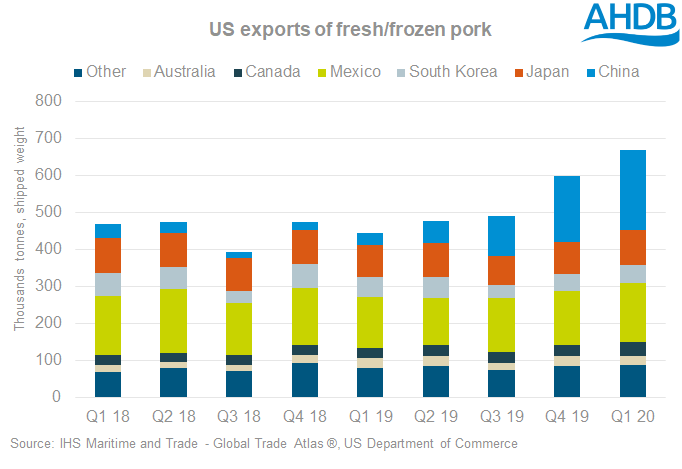 Canada’s export performance in the first quarter saw improvement, with volumes increasing y 16% to 290,000 tonnes, again underpinned by trade to Asian countries, in particular the continued strength of the Chinese market. China imported 124,000 tonnes of Canadian pork in the first quarter, up 53% year on year, and Japan imported 57,000 tonnes, up 10%. Volumes to South Korea fell by 28% to 6,900.

Duncan Wyatt, lead analyst at AHDB said that whilst North American exports have risen these figures pre-date the processing capacity issues caused by outbreaks of coronavirus in important meatpacking plants in the US.

He said: “Pork production has been cut dramatically, and the positive start that 2020 had in production, was severely derailed in April and May. However, most if not all processors in the US appear to be operating again now although perhaps at reduced capacity. Unfortunately, some lost production will not be regained, and there could be an oversupply of live pigs for some time to come. Sow slaughter has been elevated too in recent weeks, and this can be expected to curtail production growth in the medium term.”