In the first four months of this year, UK clean pig slaughter totalled 3.68 million head. This is 4% more (152,800 head) than in the same period last year. The higher slaughter in March alone accounts for over 55% of the uplift so far this year. 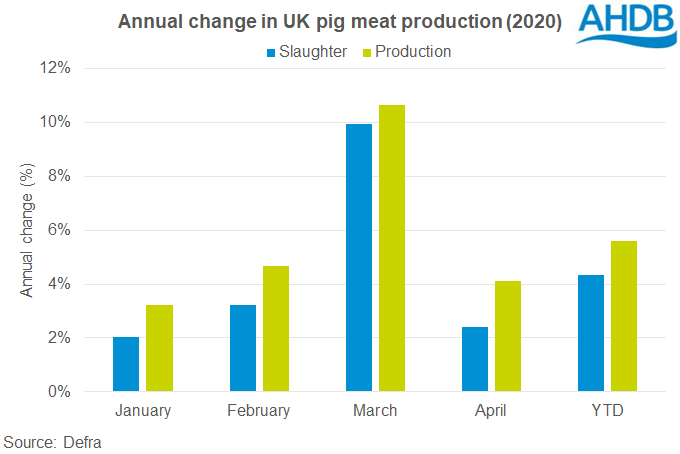 Finished pig carcase weights in April averaged 86.2kg, 1.0kg (1%) more than in the same month last year. While this is still ahead of last year, it is 0.4kg lower than average weights seen in March.

Felicity Rusk commented: “A seasonal decline in weight is typically seen at this time of year. Nevertheless, this could also be due to processors encouraging producers to pull pigs near finishing forward when the quarantine measures were introduced at the end of March. As such, some of these lighter animals may have been still coming forward in early April, which will have reduced the overall average.”

Slaughter of sows and boars recorded a significant uplift in April. Adult slaughter reached 22,500 head, 20% more (3,700 head) more than in the same month last year. With the cull rate relatively low across last year, the age profile of the herd will have risen, meaning an uplift in culling rates is expected this year.

Felicty Rusk said: “The rapid escalation of the pandemic may have also given producers the incentive to adopt a harder culling policy. Sow prices have moved down and there are reports that highlight concerns over traditional end markets. Nevertheless, for some producers, taking a lower price may be more economical than keeping that animal on.

Ms Rusk added: “UK pig meat production reached 81,700 tonnes in April, 4% (3,200 tonnes) more than in the same month last year. As such, production in the first four months of this year totalled 329,800 tonnes, 6% (17,500 tonnes) more than in the same period last year. However, March alone accounts for almost half of the overall growth seen this year.”