“Previous AHDB analysis highlighted the gap between the UK and EU reference price is overstated by around 6p, when considering standard indoor production.” 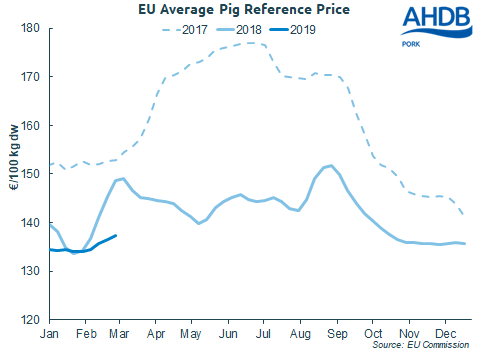 Prices in Spain jumped by €9/100kg in the four weeks to 3 March. This reflects strong demand from slaughterhouses, which are reportedly building up stocks in expectation of rising prices in the coming weeks and months.

Ms Wilkins added: “There have been increases in most of the major producing states, though at a slower pace. Prices rose by around €5 in Belgium and €4 in Germany and the Netherlands. Increases in other countries typically ranged between €1 and €3.”