UK clean pig slaughter in July remained steady on June’s level, at 940,000 head, after a downward revision to June’s figure, according to Defra data. Average carcase weights were 86.7kg, only 200g heavier than in June. July’s production figure was, however, 2% lower than during the same month last year. 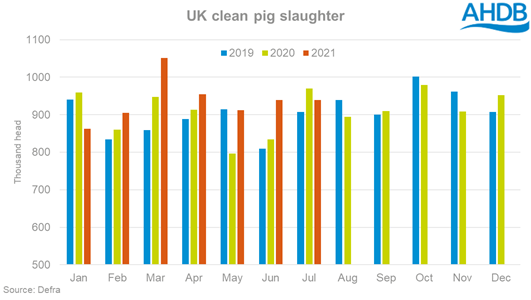 Mr Wyatt said that the SPP sample had recorded an 8% decline in GB clean pig numbers during July, compared to last year, meaning there was expectations of a larger year-on-year decline in slaughter numbers to be reported.

“It may be that within-company traded pigs, which are not included in the SPP, have been less affected by any slaughter delays,” he explained. “There are certainly reports of producers rolling pigs again as they did at the beginning of the year. How the situation develops in the coming weeks will be critical.”