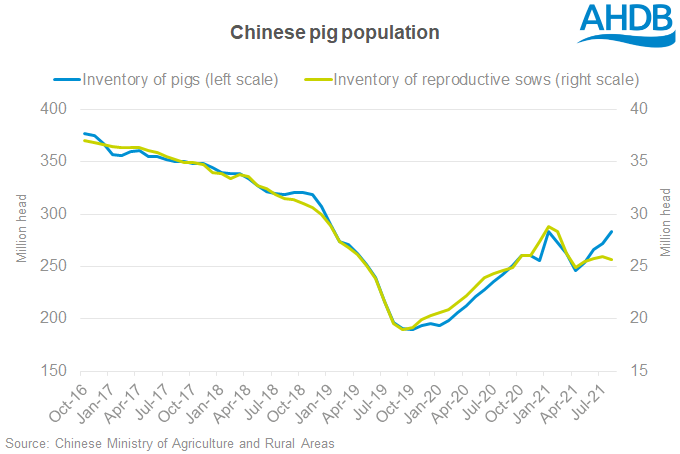 Prices have likely fallen as a result of increasing pork production in China, as the herd recovery is now underway, meaning the peak of import demand is likely passed, and volumes are expected to fall.

Ms Wilkins pointed out, however, that  the road to recovery is a long one, and unlikely to be smooth; we can already see volatility developing in recent production trends.

She said: “Reports indicate there has recently been a particular short-term spike in pork production in China. Some resurgence in ASF outbreaks earlier this year encouraged higher slaughter levels, and some destocking from farms that are no longer profitable, as prices have come down.

“This is expected to lead to particularly poor import demand in Q3. Some subsequent recovery in both pork prices and import demand would be expected after the influence of this phase eases. Official statistics show that the number of breeding sows in China fell again at the start of this year, and has not yet recovered to late 2020 levels.” 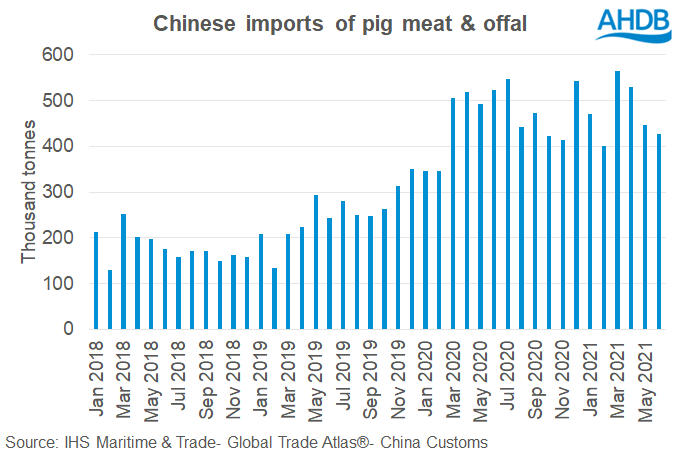 Shipments in Q2 last year received an extra boost due to difficulties supplying the market in Q1, because of COVID-19.

Ms WIlkins added that the EU is particularly reliant on China as an export market, so any weakening of import demand is likely to have particular influence on the market there, which could have knock on implication for the UK market.

She said: “Chinese imports from the US have already been falling so far this year (-21%), influenced by unattractively high US prices. This at least moderates the international competition UK/EU exporters face on the Chinese market at the moment, although US prices have dropped back from a peak in June more recently.”