Unsurprisingly, China accounted for the majority of the growth as the outbreak of African swine fever supports demand for imported product. In September, shipments of UK pork to the nation was more than twice that of last year.

Exports to the Netherlands increased by 75% in September. This could be due to the Rotterdam effect, as UK products are exported to some non-EU countries via the Netherlands.

Overall, UK imports of pig meat, including offal and processed products, were relatively steady on the year, at 79,500 tonnes in September. However, in contrast to the past four months, imports of fresh/frozen pork recorded a 10% (3,800 tonnes) increase on the year. The rise in primary pork imports was offset be a decline in bacon and processed pork products. 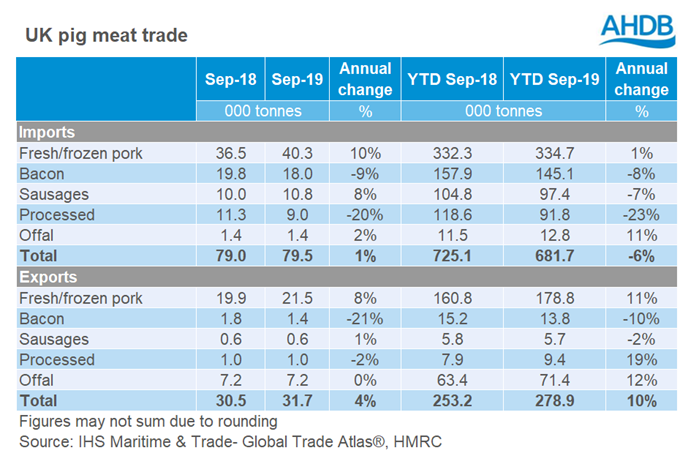 Despite a slightly stronger sterling: euro exchange rate, rising prices in the EU meant that the average import price of pork were up 20% on the year. As such, the total value of supplies was a third higher than last year, at £92.1m.