Sows in-pig fell by 1% and other sows were also down by 5%. Pregnant gilt numbers increased by 5% but there was an 11% decline in maiden gilts. 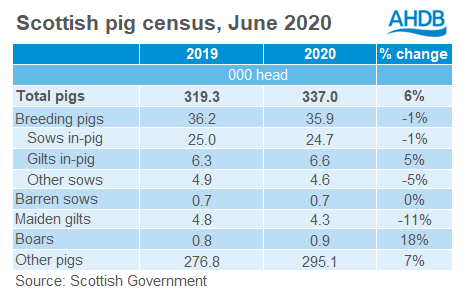 Ms Wilkins added: “While it is difficult to draw too many conclusions from the census data, producer confidence has certainly been tested since the survey was undertaken with both the pig and feed markets looking more challenging.

“Anecdotally, we have heard reports of expansion underway in recent years, particularly in the outdoor sector. The past year has been profitable for pig production due to the global pork shortage triggered by China’s ASF outbreak, though the situation is now becoming more challenging.”