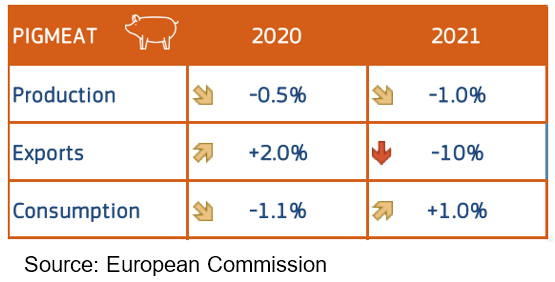 Italy experienced the earliest sustained declines in production, until it recovered in July to above 2019 levels. Danish and Spanish production have proven to be the most resilient with Spain’s production growth underpinned by exports to China in particular.

The recent trade restrictions placed on German pork by key Asian markets have also led the Commission to revise down its export forecast to growth of +2% year-on-year.

Ms Clarke added that the development of EU exports will be influenced by how ASF cases are managed, and whether key trading partners allow trade with ASF-free regions of the country.

She said: “Other EU exporters may fill some gaps in supply, although it is uncertain whether they could compensate volumes entirely. Looking further ahead to 2021, the Commission believes EU27 exports could fall by 10%, due in part to the German situation, but also to the expectation that China may increase its own pork production. We will be monitoring trade and production data as it becomes available.